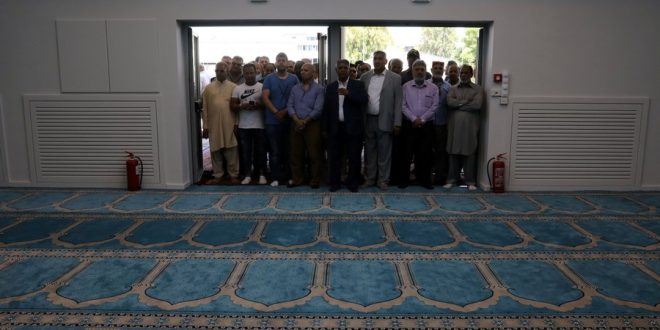 First mosque in Athens opens for prayers with 16 years delay

The first ever official mosque in Greek capital Athens opened its gates on Monday, welcoming Muslims for prayers. The operation of the mosque comes with a delay of 16 years after the relevant draft bill was worked out and was approved by the Parliament. after a 14-year wait since procedures were first launched.

The first prayers were held on Monday and Tuesday with a very limited number of faithful due to the coronavirus pandemic restrictions.

Nine men were allowed in the main space, four women in a separated hall.

“A long effort by successive governments since 2006, when Law 3512 was passed, has been completed. Greece sends a clear message inside and outside the country, of democracy, religious freedom and respect,” said General Secretary of Religions Giorgos Kalantzis.

Prayers were held at the mosque, located at 144 Iera Odos in the Votanikos district, in strict adherence to social distancing rules and other safety measures enforced across Greece to contain the spread of the coronavirus.

The mosque was originally scheduled to open in June 2019, then its inauguration was postponed for September same year.

It has become target of vandals in the past, who sprayed slogans and Christian symbols and even hung a wooden cross.