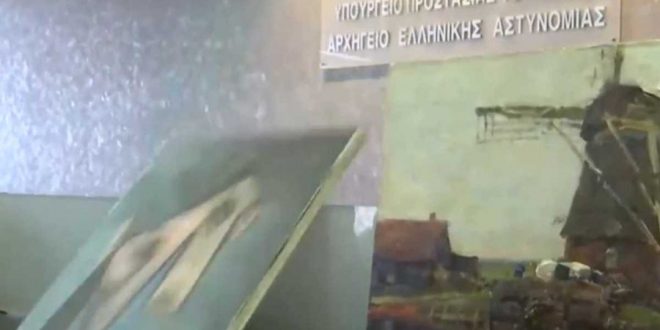 An unprecedented and at the same time highly ridiculous incident:  The priceless Picasso painting, stolen and recovered, slipped and fell on the floor during the press conference held at the Ministry of Civil Protection in the presence of the Culture Minister.

The police officer was quick to pick up the painting from the floor and put it back on the perch without visible damage – Thank God!

Never has a masterpiece suffered so much in its entire life as the Picasso in Greece: It was stolen by a construction worker from the National Art Gallery in January 2012 and was stored in a plastic bag, hidden in a crypt in the woods until it was recovered yesterday, Tuesday. 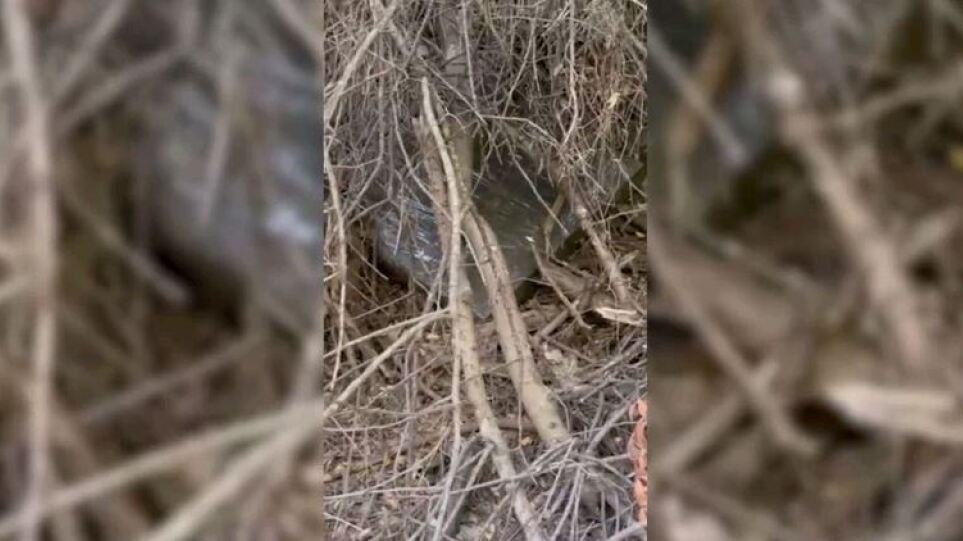 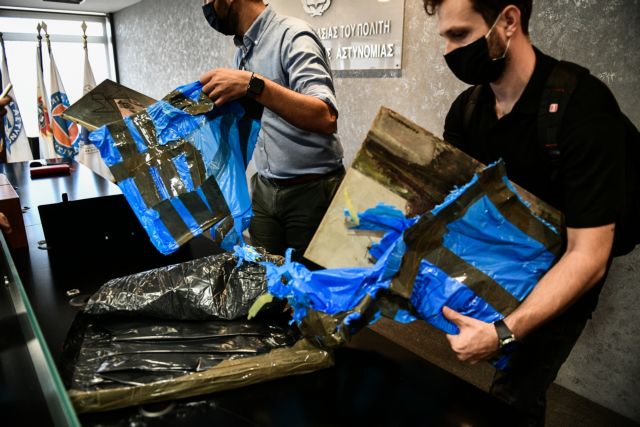 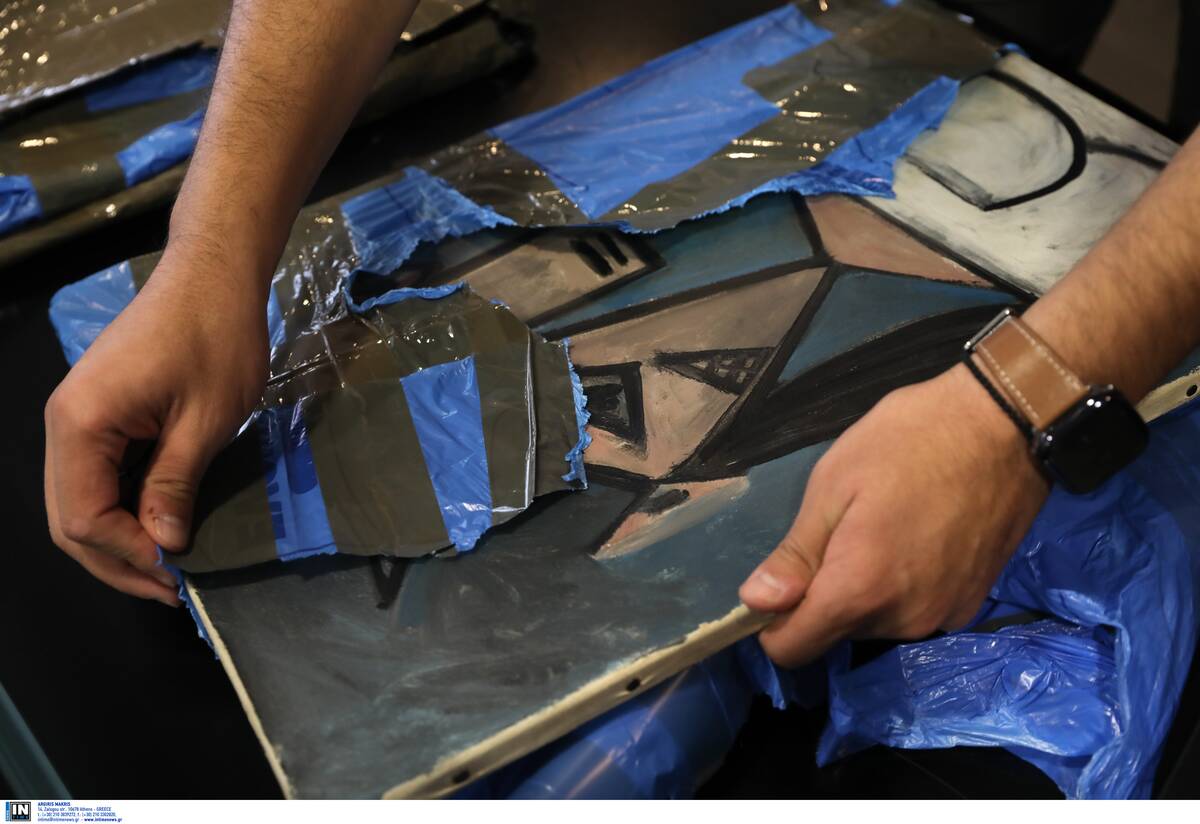 The painting was brought together with stolen Mondrian to the Police headquarters for the Minister of Citizen Protection and the Culture Minister to proudly present the recovery.

Loyal to the Greek spirit “we handle with care not!”, the masterpieces were carried by policemen to the show. Protection measures likes gloves? No need to. We just keep our thumbs away in order to avoid more fingerprints on the canvas. 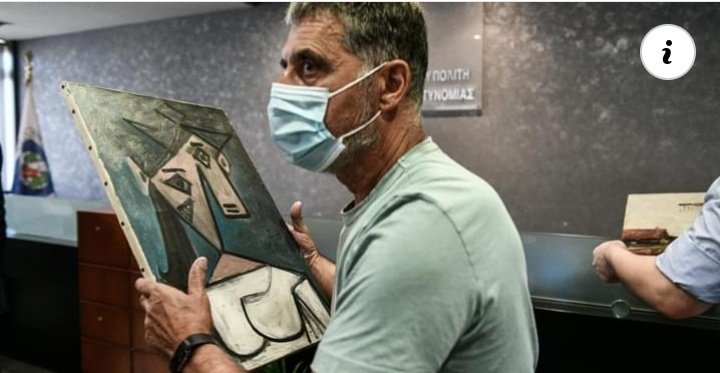 A police masterwork and an indifferent and apathetic Culture Minister Lina Mendoni. She had apparently spent the whole budget in pouring concrete on the Acropolis. 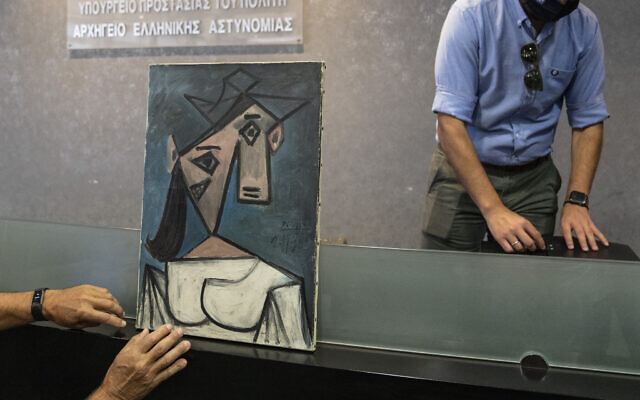 While, the Mondrian Windmill adjusted quickly itself to the provisional podium and its fate, the Picasso refused to stand still in the Greek circus. The Spanish masterpiece was obviously rebelling against the Greek sloppiness. 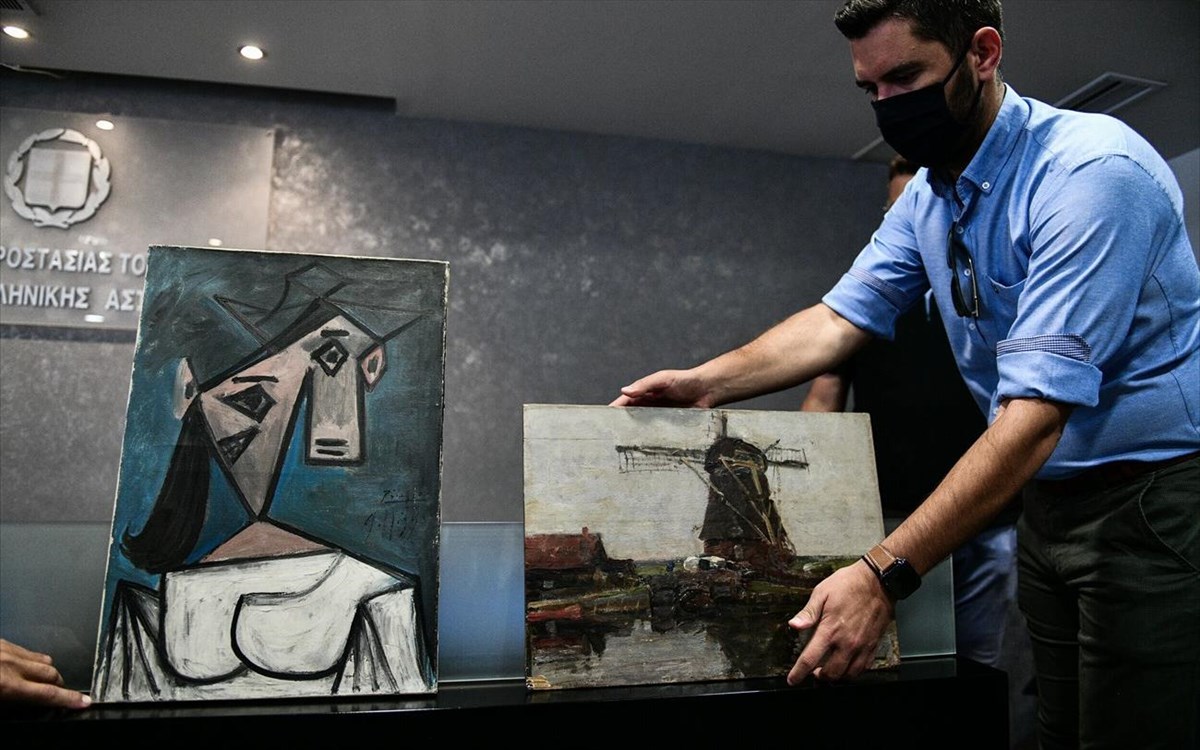 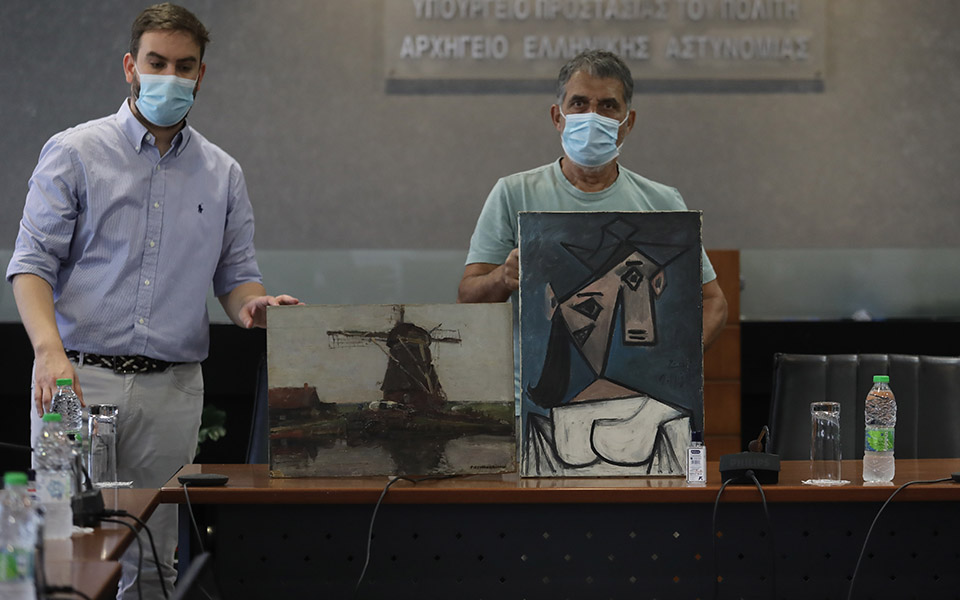 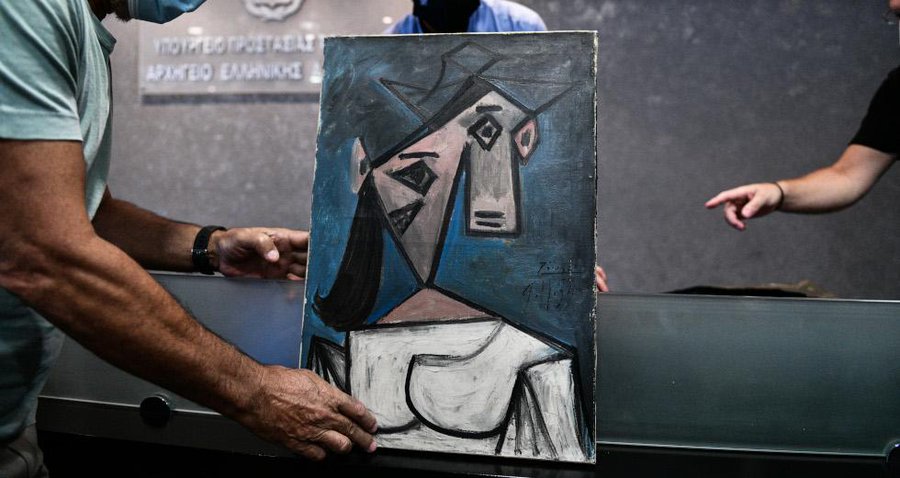 Of course, there are always solutions to problems like this: Greek solutions for masterpieces. 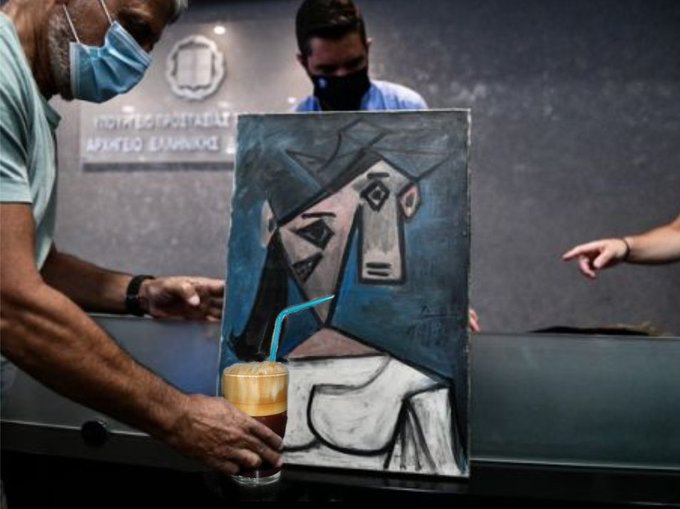 How to prevent a Picasso from falling down – Greek solutions for masterpieces https://t.co/yAZOAJcDRo

“This painting is of particular importance and sentimental value to the Greek people, because it was personally dedicated by the great painter to the Greek people for their fight against fascist and Nazi forces,” said Culture Minister Mendoni after the faux pas.

Arts experts told media that gloves should have been used for the protection of the paintings and that those at the presentation were the original ones and not copies.

To add the icing on the cake on the ongoing tragicomedy in the country, apparently both the Police Minister Michalis Chrysochoidis and Culture Minister Mendoni were advised to link the recovery to the 200 years form the Greek Revolution of 1821. 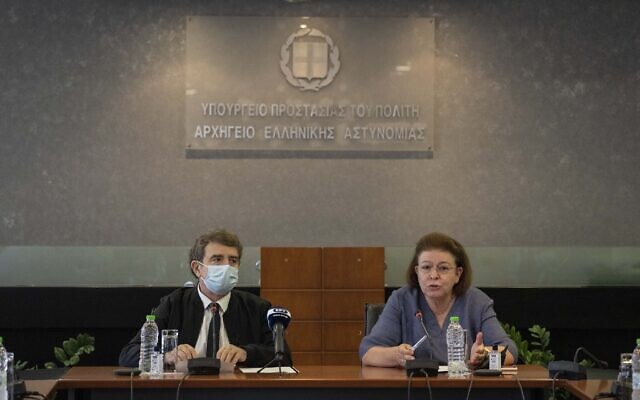 “A Greek removed them, Greeks recovered them,” Chrysochoidis said out of the blue during the presentation.

“Today is a special day of joy and emotion,” said Culture Minister Lina Mendoni. “We are celebrating the 200th anniversary of the Revolution of 1821. Picasso’s painting carries special weight and value for the Greek people as Picasso dedicated it to the struggle of the Greek people against the fascist axis and bears the painter’s handwritten signature. That is why the painting is impossible to sell and exhibit as it is completely identified as a product of theft from the National Art Gallery.” 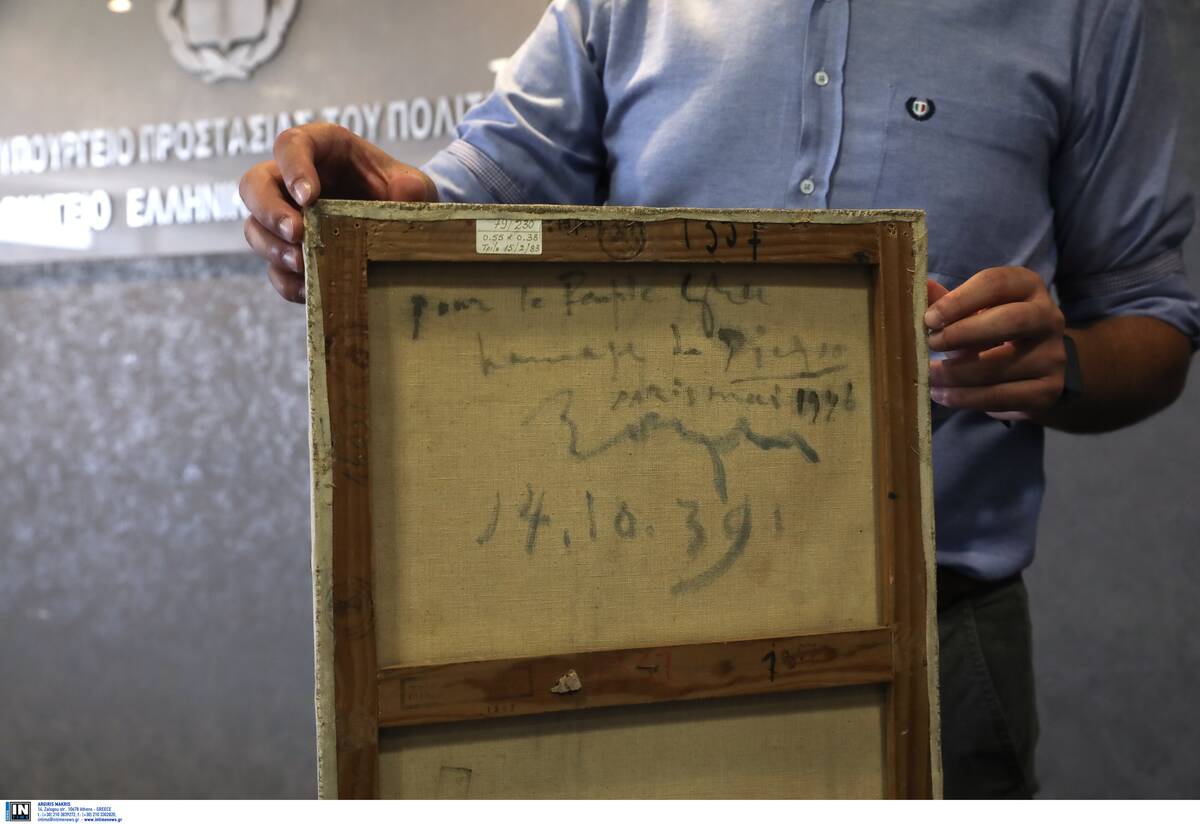 “The National Gallery closed for renovation in 2012 shortly after the theft. It opened in March 2021 for a few days, in order to honor the struggle for independence and self-determination of the Greek people. The correlation is obvious,” Mendoni stressed.

The only “obvious connection” I see is that Picasso would have thrown away his painting brushes and  become a singer or something had he still be alive and seen how Greece handled his precious masterpiece including his handwritten dedication.

At least, we narrowly escaped such an embarrassment! 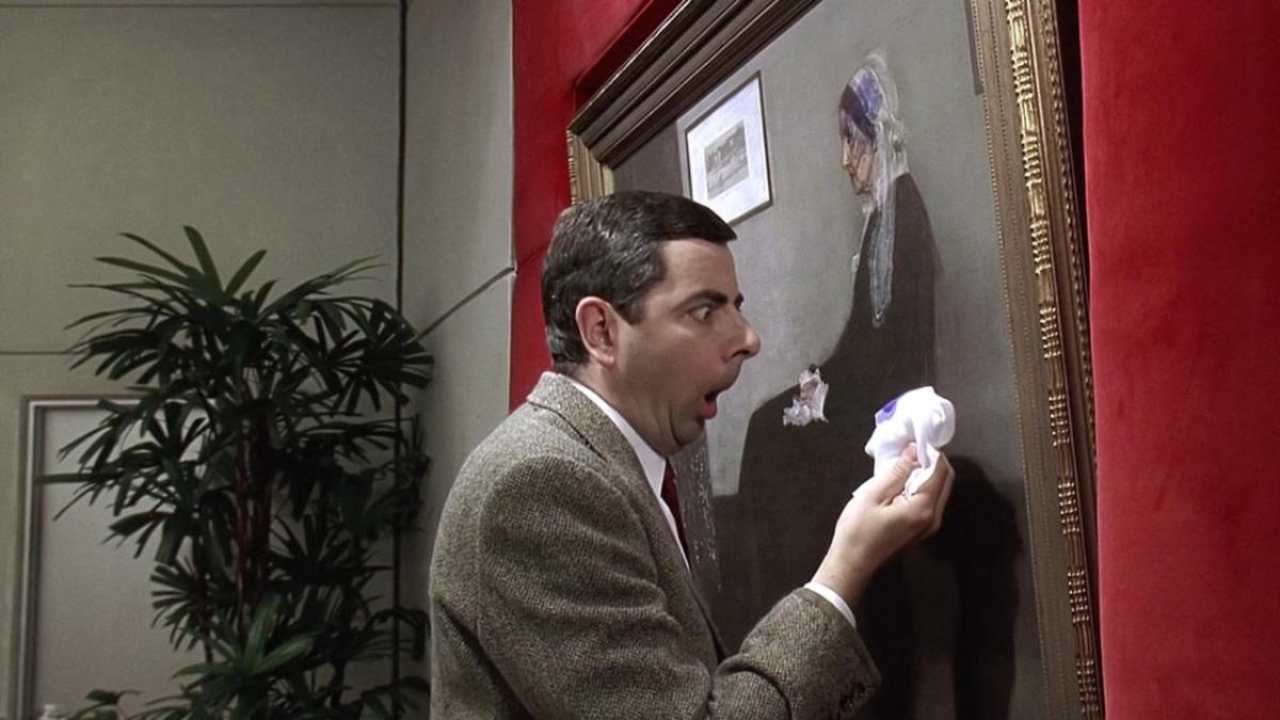 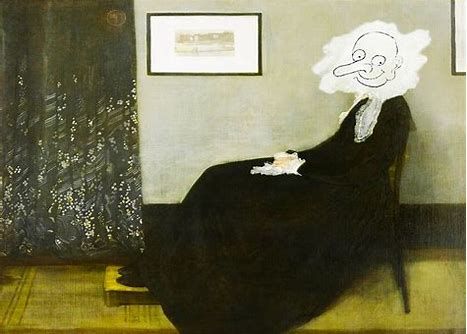 PS Unconfirmed rumors claim that the British Museum is considering to claim the whole Acropolis to ensure the protection of the world’s cultural heritage.