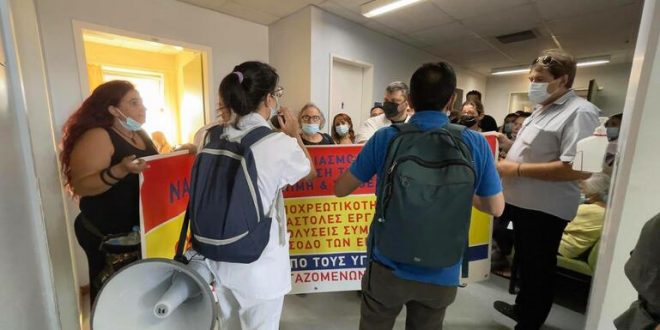 Greek hospital workers protest compulsory vaccination on Wednesday as the deadline for unvaccinated health workers expired on September 1 and the first notices of suspension without pay started to be issued. The government move to suspend unvaccinated health workers could send home 8,000 to 10,000 people and drive to desperation thousands  of patients and working staff in understaffed health facilities, before new hiring and training of temporary personnel is concluded. 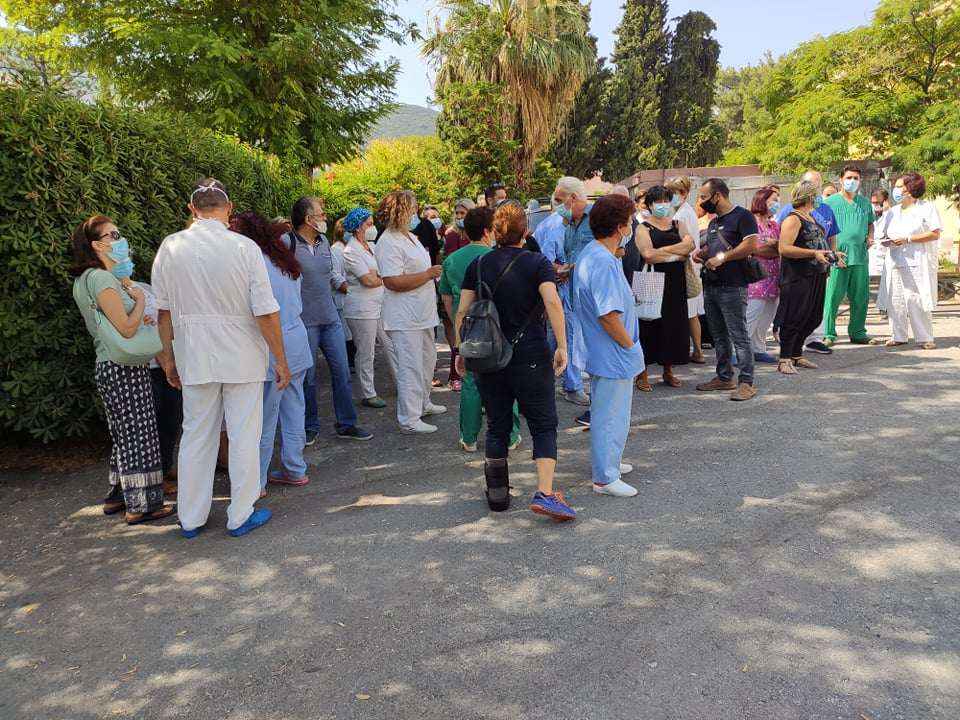 The deadline for the mandatory vaccination against Covid-19 of health workers expired on Wednesday, September 1.
Those refusing to get vaccinated or without certificate of recent recovery from Covid-19 will be suspended from their work and sent home without payment.

Exemptions will only be granted to those with a proven medical reason to not be vaccinated.

Unionists told media that 94.5% of doctors are vaccinated and 90% of nursing staff and other hospital personnel and that 8 to 10 thousand workers will be suspended.

Special committees set up to evaluate “medical reasons” for the non-vaccination reject 85%-90% of the requests, media reported. Rejected is the majority of exception application citing thrombosis, autoimmune diseases and others. Reason to be exempted are serious allergic reactions and few cases of people who receive specific treatment, the National Vaccination Committee has reportedly recommended.

Union to continue with protests

The Union of Public Hospital Workers (POEDIN) on Wednesday urged colleagues to go get the shot but also lashed out against the measure.

“We appeal to all our colleagues to book a vaccination appointment, even in the final days,” the union said in an announcement.

At the time time, it added that POEDIN will “not allow colleagues to lose their jobs.”

The union announced to launch a work stoppage from 10 a.m. to 3 p.m. on Thursday, Sept 2, 2021, and protest rallies at the Health Ministry in downtown Athens as well as in other cities such as Thessaloniki and elsewhere. 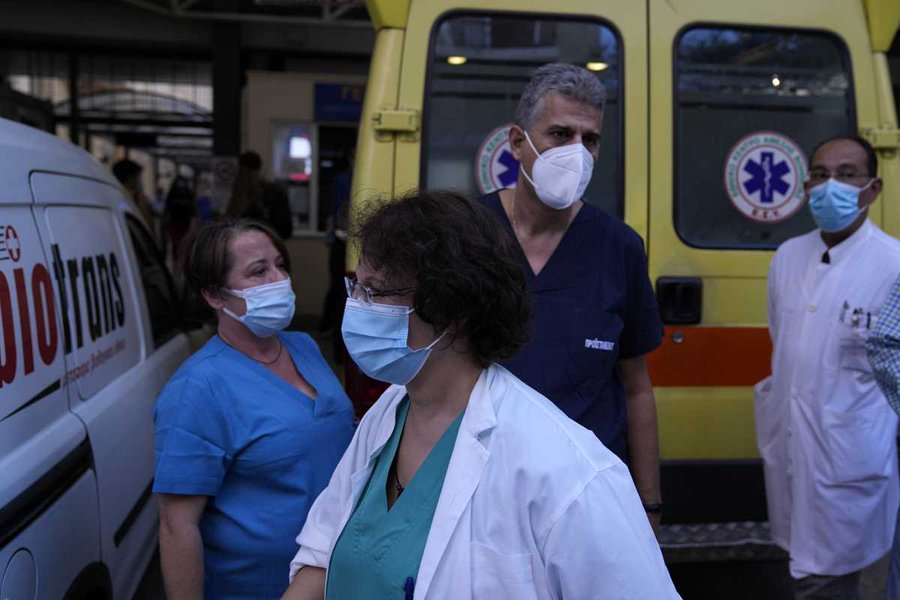 Indicating that this is just the beginning of its protest action, POEDIN called on the government to freeze the measure for a couple of weeks, saying that some 2,000 healthcare workers have booked an appointment for a shot in the past few days.

The union warned that suspensions will lead to significant shortages at the country’s already stretched hospitals.

But the government seems determined no matter what the cost for patients and the operation of hospitals. Especially outside the big urban centers, the measure will lead to serious congestion and there are reports that surgeries have been already cancelled in peripheral hospitals.

On his first day as Health Minister Thanos Plevris said that the law will be strictly implemented as scheduled.
Other ministers  warned that unvaccinated health personnel should seek jobs in other sectors.
The Health Ministry is reportedly prepared for the “great exodus” of staff due to the suspensions with a wide array of preemptive measures to fill the gaps and to avoid the collapse of the public health care system. These measures include a reshuffle of healthcare workers within hospitals, mergers of clinics and departments, the replacement of those suspended with auxiliary staff and partnerships with the private sector for support services such as catering, care etc.

The platform for the hiring of people that will fill the gaps to occur opened today, Wednesday. Also on Wednesday the Council of State rejected the POEDIN request for temporary freeze of the compulsory vaccination measure.

Vaccination a pretext to get rid of hospital staff?

According to the usual mean Greeks, the government uses the pretext of vaccination to get rid of thousands of workers with permanent work contracts, replace them with temporary staff and proceed with its plan for a “lean” public health care system that will cooperate with the private medical sector.

PM Mitsotakis had revealed such a plan the moment he assumed power in 2019. He showed his real intention also during the pandemic when he chose to send patients to private clinics instead of hiring staff and open more ICU beds.

Experience during the pandemic has shown that while public hospitals were with few urgent exceptions practically shut down for general health issues other than Covid-19, citizens had to seek private hospitals, clinics and laboratories that did not hire more personnel to meet the increased demand. With the effect that although many patients paid from their own pockets for services they had to stand long queues as in the public sector.

In some private hospitals in Athens there was only one nurse per shift in ER full of people, because the private sector saw a chance to profit out of the crisis as well.

The time when clapping hands at the balconies to show gratitude to frontline hospital workers fighting the pandemic is over. In fact it ended in May 2020. Neo-liberalism has won.

Right at the beginning of the coronavirus some ministers had said that the pandemic was “an opportunity.” That prophecy now makes sense…