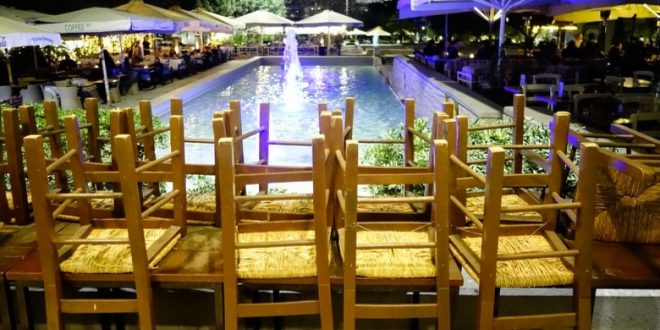 Restaurants, taverns, pizzerias, cafeterias and take away/delivery stores only will shut down for 24 hours on Tuesday, November 16, 2021, as owners of food service facilitiess in Greece request support measures by the government.

Food service enterprises launch the protest action across the country saying that restrictions for unvaccinated have heavily affacted their turnover that has been down by 30% to 50% since the measures were imposed since November 7.

Food service enterprises in Greece will shut down in protest at the new restrictions on the unvaccinated next Tuesday, November 16, and not this Thursday, as had previously been announced.

On that day they will also submit a statement of protest to the prime minister at noon.

Head of the sector’s federation (POESE), Giorgos Kavvathas, told media that food service turnover last weekend, the first under the new measures, was down by 30% to 50%, while on Monday and Tuesday that followed the decline amounted to almost 80%.

The POESE is demanding offsetting measures to cover the revenue losses. It said in a statement that they demand no repayment to the sate of the loans “Deposit To Be Returned”, resumption of rental exemptions and furloughs, exemption from council tax payments, a reduction of the value-added tax rate on food service to 6%, and the extension of subsidies for loan tranches and new credit issued similar to that of late 2020 and early 2021.
Depending on the strike participation on Tuesday, the POESE may launch more actions.

The restrictions aiming to a unique lockdown for unvaccinated citizens require multiple Rapid or PCR tests per week and at their own expenses..