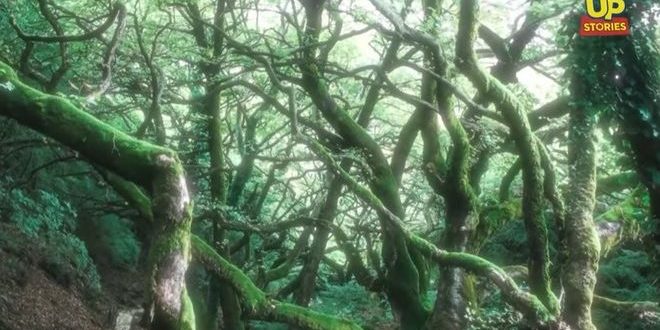 There is a mysterious forest in Greece where the trees dance causing goose-buds to visitors. The forest is located in the route called the “Path of Asclepius” where thousands of herbs and aromatic plants grow in Central Greece.

According to legend, ancient Greek god and healer Asclepius used to climb on the mountain and collect aromatic plants and herbs he used for medical purposes in order to heal his patients.

For the first time ever, Up Stories in collaboration with the award-winning creator Fotis Passos present the mysterious forest and the strange natural phenomenon with the deformed trunks of threes that they seem to have been frozen while they were dancing.

According to the legend, the ancient god of medicine, Asclepius, often climbed to the slopes of the famous mountain Koziakas (Kerketio mountain 1,901 m. altitude), part of southern Pindos that extends from Kalampaka to the Gate of Trikala.

This beautiful route in the rich nature leads to under age-old plane trees. and next to the clear and gurgling waters of Kefalopotamos that flow from the “heart” of Koziakas and passing through the villages of Gorgogiri, outside Xyloparoiko, reach Trikala and then poured into Pinios river in central Greece.

The waters of the river, rushing in winter and calm in summer, impress pleasantly, like they change of colors every season.

The “Path of Asclepius” evolves into a viral destination for those who seek relaxation and tranquility, in a unique natural environment.

It is worth mentioning that similar forests with similar characteristics (distorted logs) are found both in the coastal forest on the Curonian Spit peninsula that stretches from the Lithuanian border to the Russian city of Kaliningrad and in Poland.

Believe us. In none of the previous and famous forests with “dancing trees” the distortion of the logs is as intense and the surrounding atmosphere as mysterious as in that of the “Path of Asclepius”.

For the Path of Asclepios route see also here.