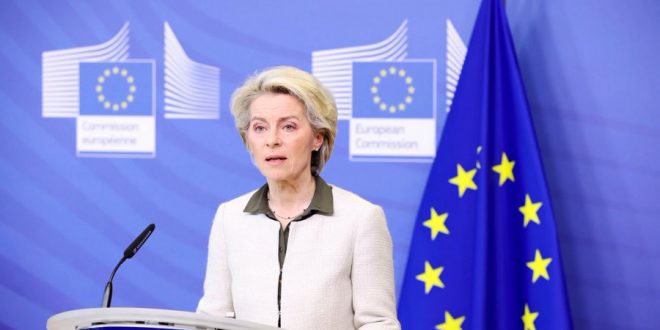 The European Union is shutting down the EU airspace for Russian-owned, Russian registered or Russian-controlled aircraft, Commission president Ursula von der Leyen announced on Sunday evening, in a second package of measures against Russia.

Russian aircraft “won’t be able to land in, take off or overfly the territory of the EU, von der Leyen said adding the measure includes also “the oligarch’s private jets.”

First, we are shutting down the EU airspace for Russian-owned, Russian registered or Russian-controlled aircraft.

They won’t be able to land in, take off or overfly the territory of the EU.

Including the private jets of oligarchs. pic.twitter.com/o551M9zekQ

So far the countries that have closed their air space to Russian flights or announced to do so:

Russia has responded by closing its own airspace to flights operated by carriers from countries that announced bans, media report.

The Commission president added that they will ban the Kremlin’s media machine in the EU.

Second, we will ban the Kremlin’s media machine in the EU.

The state-owned Russia Today and Sputnik, and their subsidiaries,
will no longer be able to spread their lies to justify Putin’s war.

We are developing tools to ban their toxic and harmful disinformation in Europe. pic.twitter.com/7RcPEn6E14

She added that a third measure against Belarus and “the other aggressor in this war, Lukashenko’s regime”  will be punished with a new package of sanctions, hitting their most important sectors.

“All these measures come on top of the strong package presented yesterday, agreed by our international partners,” she added.

Greece has not decided to close its air space to Russian flights, so far (8 pm Feb 27), however, the Foreign Ministry advised Greeks earlier to postponed unnecessary travel to Russian Federation.

To the package of EU and US sanctions on Saturday night that include the tough measure of excluding some Russian banks from the global SWIFT* payments system, a senior government official told Reuters.

Such a move, if taken, would mark a further escalation of concerted sanctions by the West against Russia and would make it harder for Russian companies to do business, Reuters noted.