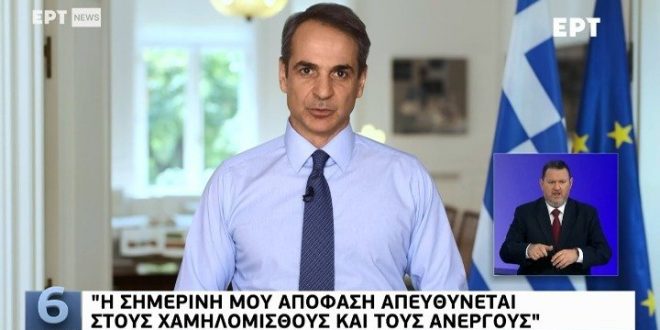 Prime Minister Kyriakos Mitsotakis finally announced the much anticipated increase of the minimum wage as well as an increase of the unemployment allowance. “My decision today addresses the low-incomers and the unemployed,” he said in his televised message.

The allowance increase will make unemployed citizens richer by 31 euros per month. Τhe monthly benefit so far is 399 and will reach 430 euros as of May 1. The unemployment benefit is granted for one year only.

According to the Prime Minister, the minimum wage increase corresponds to a 9.7% raise compared to 2021.

“In simple words, the almost 650,000 employees in this category will earn more than an additional net salary per year . A 15th salary is henceforth added to their income,” Mitsotakis stressed.

He said that this initiative to increase the minimum wage “reaches the extreme limits of the economy,” however, he also added that private sector “businesses have been heavily supported by his government with less taxes and levies and also with subsidies to cover the recent energy cost.”

The PM said that “unemployment falls rapidly, by whole 5 percent units within the last 33 months, despite the successive crises that have taken place.”

He added that the state will proceed with a further reduction of the social contributions by half a unit in June.

He expressed his sympathy for all those citizens telling him that they have difficulties to cope with the price hikes and wished everyone “Happy Easter!”

PS No idea why everyone is now lashing out at the Greek PM on social media. One claimed that “the 50 euros per month is just enough to fuel the car half full,” another that “713 euros is just the adjustment clause on the electricity bill.”

A third Greek is still calculating how to spend the extra 1.80 euros gross or 1.50 net per day…