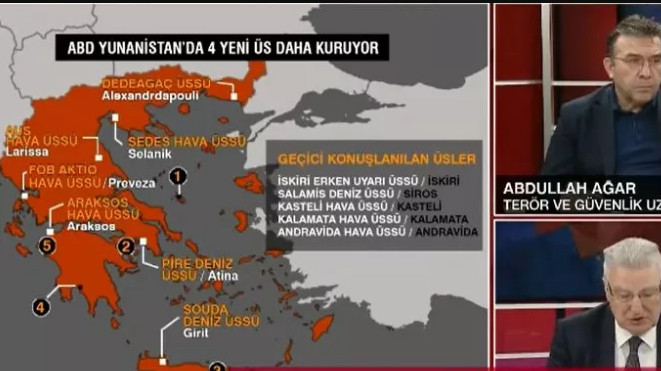 Turkey: “Agathonisi, Farmakonisi, Pserimos, Kinaros and other islands are ours”

A Turkish leader with neo-ottoman aspirations to grab Greek and Arab territories, as distraction of his country economic problems that he is not able to solve.

Erkan Karakus, Vice Admiral, said that Agathonisi, Farmakonisi, Pserimos, Kinaros and some other islands [in the eastern Aegean Sea] belong to Turkey and there is no doubt about that.

In fact, this is not the only propaganda action of Turkey, as in the last few hours it has published a video aimed at showing Turkish citizens that Greece is provoking them with its stance in the Aegean.

It seems that the Turkish government is changing its course and is no longer just promoting escalation in the Aegean as part of its supposed claims, but is now presenting a rhetoric as “the country threatened by Greece.”

Specifically, the video by state-run broadcaster TRT on Greek-Turkish relations entitled “Provocation in the Greek archipelago” presents “the provocation of Greece that disturbed the balance established by the Treaty of Lausanne and that of Paris in the Aegean Sea.”

Greece turned the islands into an arsenal

In the video, pro-government journalists and academics talk about how Greece “turned the islands into arsenals and barracks, violating international law.” The Aegean islands also include the Dodecanese, which in 1912 were given to Italy on the condition that they be returned to the Ottoman state. In 1923 it was determined by the Treaty of Lausanne that they must be disarmed.

“After the end of World War II, this time they were given to Greece.”

Yeni Shafak: “The foundations of Greece were born of blood”

At the same time, the Yeni Shafak newspaper talks about the successive massacres committed by the Greeks during the Greek Revolution. The article cites positions of the famous British historian William St Clare on the battle of Tripolis:

“Greece, which stands against Turkey with the support of Western countries, owes its establishment to the brutal murder of tens of thousands of Muslims. Historical records, documents and testimonies reveal that the Greek Revolution was a series of successive massacres.”

The article then moves against Cyprus, Makarios and the clergy: “The constantly escalating hostile attitude, in the last weeks that Greece has adopted towards Turkey, has acquired a new dimension with the hint of Prime Minister Kyriakos Mitsotakis that NATO is on “our side in the tensions with Turkey”.

“The bloodiest of the massacres committed by the Greek militia against the civilian Muslim population took place in the Peloponnese in the autumn of 1821. The Greeks, who found Muslim Turks and Albanians in many settlements, especially in Tripolitsa, killed more than 30,000 people, among them women and children.”

The British historian William St. Clare said that “the genocide in the Peloponnese ended only when there were no Muslim Turks left to kill,” the report said.

At the same time, he refers to the statements of Recep Tayyip Erdogan, who, speaking at the meeting of his party’s group, reacted to Greece’s policy towards Turkey and said: “Greece will not come to the right path. We will no longer talk to this country. Every now and then their planes take off and put on displays. What are you doing? Come to your senses. Do you not learn any lessons from history?”