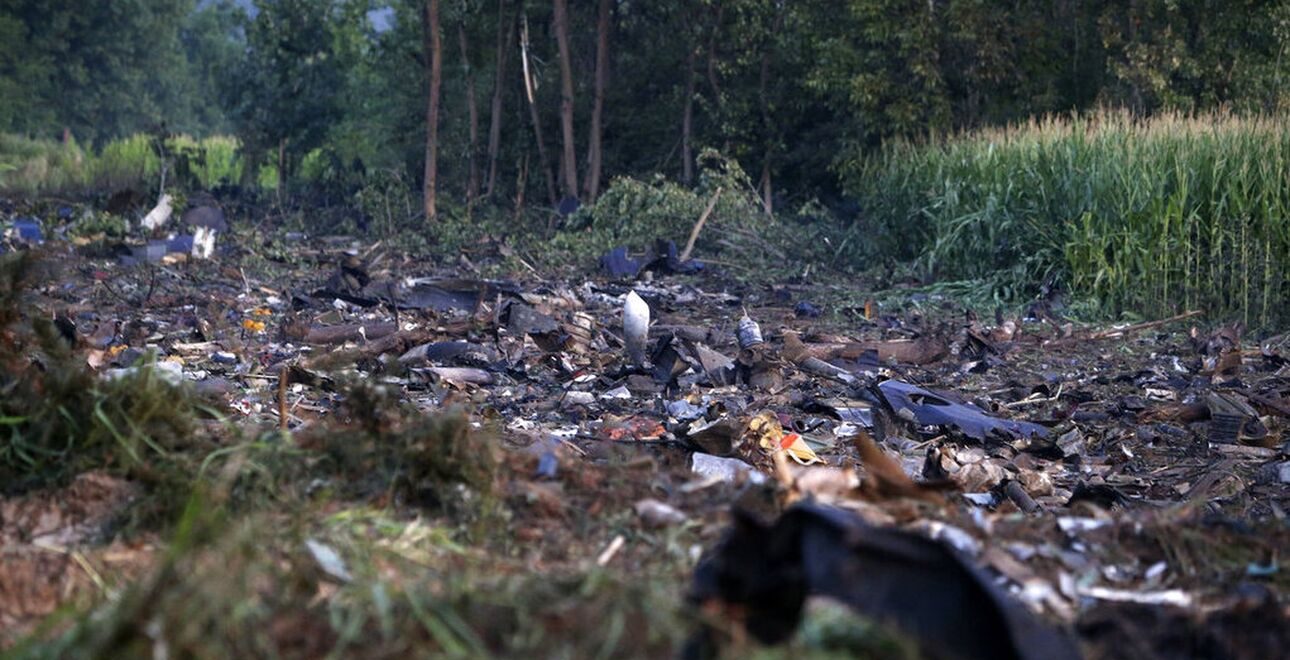 UPDATE Antonov Crash: Greece’s Authorities on high alert due to a “white powder”

Teams of the Biological Defense Division of the Greek Army are expected to travel to the site of the Antonov crash, due to the existence of a “mysterious” white powder in the area. The white power shattered over the area raises fear of a toxic cargo. The evacuation of a village nearby is under consideration. Two firefighters and a TV reporter sought medical aid due to respiratory problems. Locals complain about “burning in mouth, throat and eyes.”

All 8 crew members are Ukrainian nationals. They have been proclaimed dead Sunday noon, although no rescuers have approached the crash site closer than 50 meters.

Drones have captured images of human remains shattered on the area.

The Antonov came down like a “fireball” in the night sky as at least one of its engines had got fire.

What is the White Powder in the area? 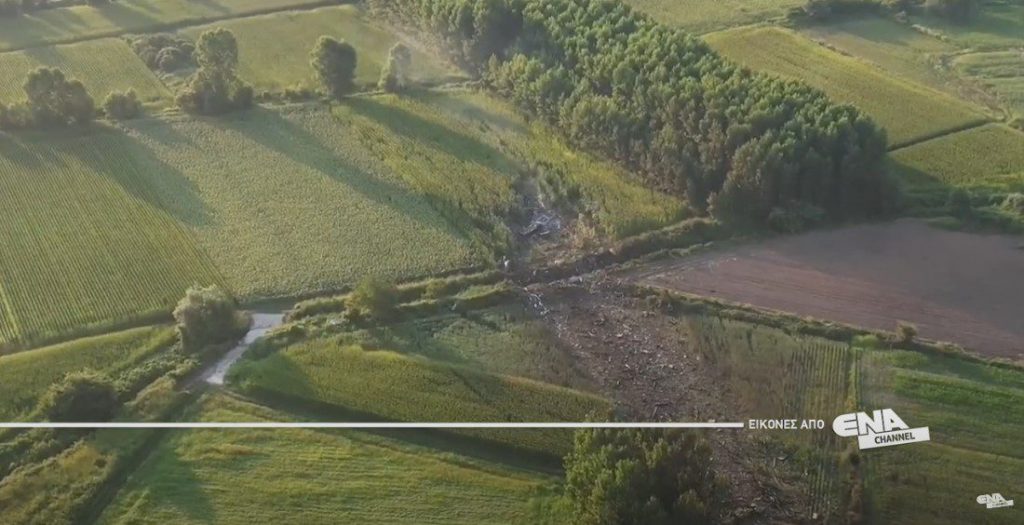 By order of the Greek General Staff, two teams from the Biological/Nuclear/Chemical Defense Division company is being deployed to the crash site in Kavala to assist in the investigations by fire-technicians and the Fire Service.

According to state broadcaster ERT, two special teams consisting of 14 people is to comb the area to detect and determine the exact substance of the powder as provided by the protocol  for dealing with such incidents.

Authorities are on high alert as rescuers and local residents have complained of a “penetrating smell causing irritation in eyes and mouth.

It is indicative that even rescuers of the Fire Service EMAK at the site since last night have not approached the crash closer than 50 meters.

Drones of the Army and the Fire Service captured loads of white powder shattered on agricultural fields.

There is a lot of this white powder scattered in the fields, the coordinator of the Fire Department told state broadcaster ERT on Sunday morning, noting “we felt a burn on the lips and tongue.”

Measurements for radioactivity did not show anything alarming, according to the Fire Service coordinator. 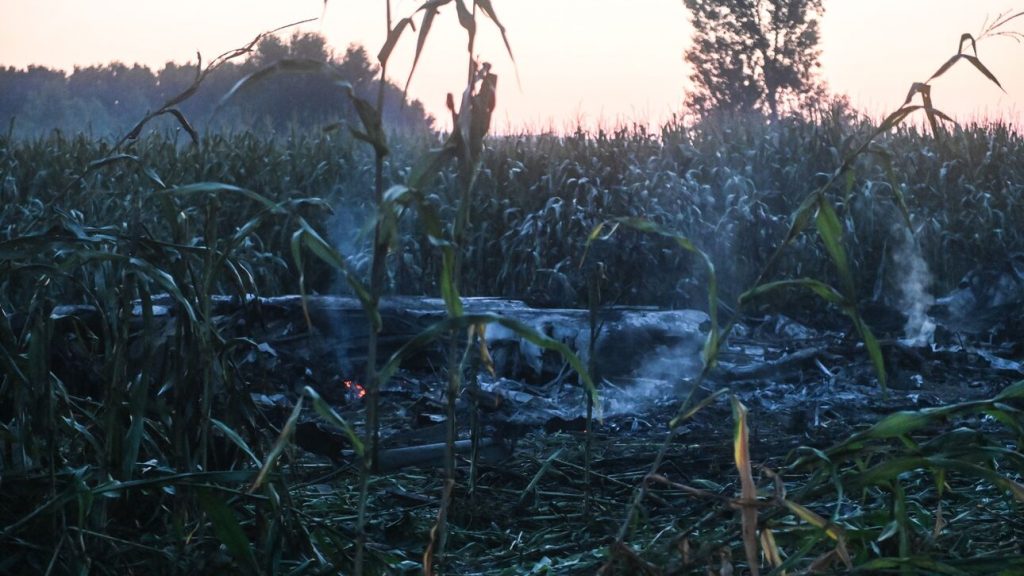 Next to the white powder, there is reportedly also an unknown number of mortars that did not explode during or after the crash.

Residents of nearby villages Antiphilippoi and Palaiochori are strongly advised to keep windows, doors and A/Cs closed, until there is a safe assessment of possible air contamination from the airplane cargo material.

Media reported that authorities are considering the evacuation of Antiphilippoi village due to fears of further explosions at the site, which is located less that one kilometer away. 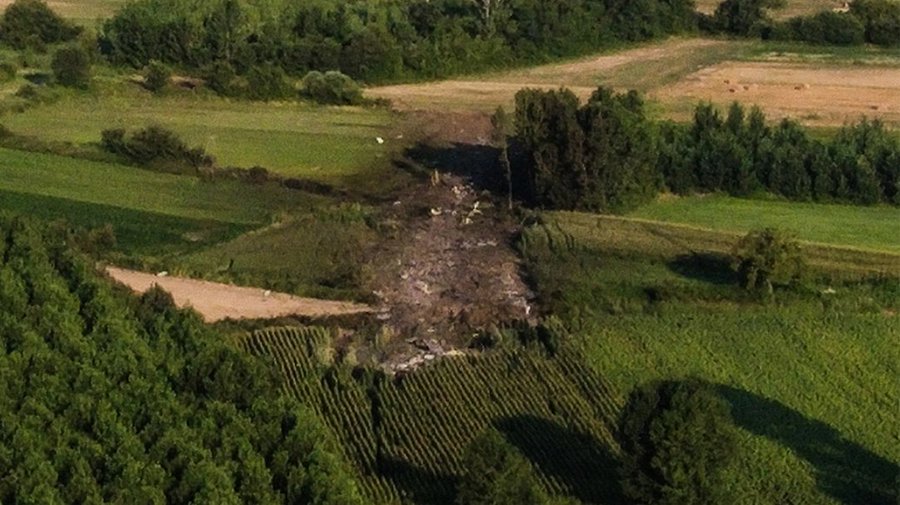 The regional governor of Eastern Macedonia & Thrace, Christos Metios, said that they were waiting for experts’ assessments on whether the cargo material is dangerous for public safety.

“We felt burning on the lips and tongue”

ERT reported that two firefighters with respiratory problems sought medical aid at the local health center and one TV reporter is hospitalized in Kavala with similar problems.

“There are small outbreaks of fire, in a radius of at least 500 meters. We have prohibited entry to the area where we operate, residents have been advised not to approach, to be careful and to keep windows and doors closed. We felt burning on the lips and tongue, and we wear masks. We don’t know what is affecting us”, Apostolidis stressed.

He added that the fire service will enter the site once the fire-technicians give the green light that it is safe for rescuers.

“We have approached the area wearing the masks to within 50 meters, we have seen a piece of the fuselage, there is a lot of material scattered in the fields,” he added.

Drone material from the crash site has shown that only a piece of the Antonov fuselage is there, while the rest of the rubble seems to have been “vanished in the air.”

“The field must be stable and safe for rescuers to enter. We will not endanger anyone. There are 13 people from EMAK and 26 firefighters,” Apostolidis added.

The Antonov-12 crashed in a corn field near Kavala at 11:15 Saturday night, when the pilot was attempting an emergency landing after one of its engines caught fire.

Locals saw a “fire ball” in the night sky and then a big explosion on the ground.

The Ukraine-registered  and reportedly owned by a private American company Antonov had left the airport of Nis in Serbia and its flight destination was given as Amman in Jordan. On Sunday media in Serbia reported that the final destination of the plane was Bangladesh with refueling stops in Amman, Riyad, Saudi Arabia and India.

Serbian Defense Minister said Sunday morning that the Antonov loaded “11.5 tons of ammunition” in Nis. He reportedly added that the cargo consisted of training mortar projectiles exported by a Serbian private company and the buyer was the Defense Ministry of Bangladesh.

The minister stressed that the cargo was “conventional ammunition” and that all was done according to the law.

The use of white phosphorus is not outright banned under international weapons law. It is not illegal for militaries to possess it, and armed forces around the world (including U.S. troops) have said they use it to mark a target or create a smokescreen. 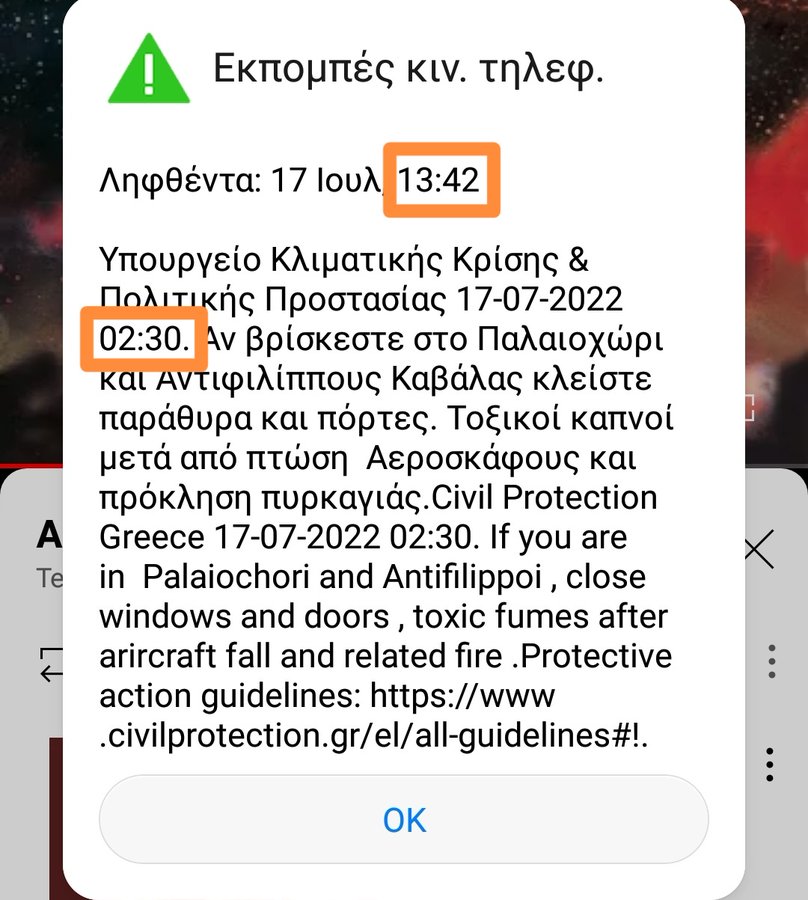 In an emergency message Sunday noon,  the Civil Protection urged residents of Palaiochori and Antiphilippoi to close doors and windows due to “toxic fumes” from the plane crash.

Greece’s  Unified Search & Rescue Coordination Center (ESCED) has reportedly received a message from the Serbian weapons and defense systems company Valir, the  principal of the transport of the specific cargo, with the 11.5 tons of ammunition.

According to the sent information the Antonov cargo was the following ammunition: