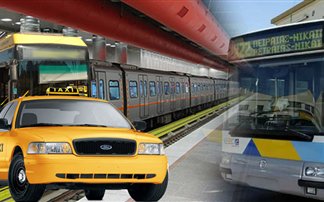 Public transport means are on work stoppages or 24-hour strike, ships and ferries remain docked, trains are parked and even taxi drivers have pull the handbrake to raise their voice against the rising prices and the cost of living.

The situation in the Greek capital Athens is for commuters even more difficult than initially expected, following the appeals of the transport companies to  Justice.

With the exception of trolleys bus workers who had announced a 24-hour strike right from the beginning, unions of other public transport means had scheduled work stoppages to facilitate citizens to move to work and to join the strike. However, the managing companies STASY and OSA appealed to the courts, the workers stoppages were declared illegal. The unions toughened their stance and turned their initial work stoppages to 24-hour strike umbrella of private sector union GSEE in the majority of public transport means.

According to media and following the latest changes, Public Transport Means in work stoppage or 24h strike in Athens are:

Only KTEL buss will operate on the 60 lines

Other transport means across Greece

Trains: Railway workers also participate in the 24-hour strike and therefore there are no trains and Proastiakos in service.

Taxis in Athens are also out of service for 14 hours as the Attica Taxi Drivers Union (SATA) had announced.

Among other sectors, also the media participate in the 24h general strike on November 9, 2022.