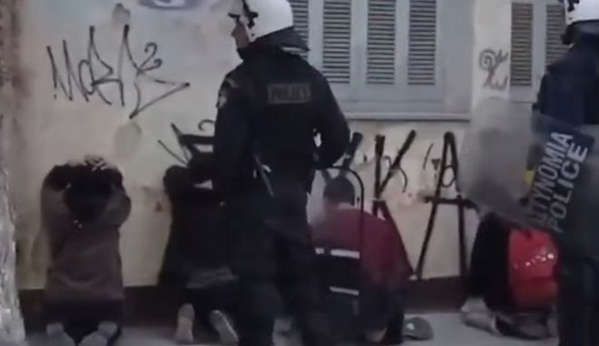 In a large operation at “Prosfygika” area in downtown Athens, Greek police arrested a total of seventy-eight people on Tuesday. Among the arrestees was a award-winning photojournalist and member of the Foreign Press Association, Nikos Pilos. He was covering the police operation and was arrested despite showing his camera and credentials.

Photojournalist Nikos Pilos was detained during a police operation in #προσφυγικα, Athens, despite carrying a camera and making his status known. Now, more than 4 hours later, he is still held in police HQ.

In 2022 #Greece dropped to 108th/180 in the World Press Freedom Index. pic.twitter.com/n6XUUAQkyI

The police operation resulted into unprecedented scenes, where arrestees were forced to get on their knees with heir hands handcuffed on their back and facing the wall. Daily ethnos comments that the footage raises questions about the police practice.

The police operation in the area of Alexandras Avenua started on Tuesday morning with police saying it had arrested a 27-year-old man accused of the arson attack on the offices of ‘Real News‘ newspaper last July.

According to police, when the 27-year-old was being brought in, dozens of people went up to the roof of the building and started throwing a number of objects and materials at the police forces operating at the scene.

Photojournalist Nikos Pilos was reportedly released at 2 o’ clock Wednesday morning and yet with felony charges.

FPA ANNOUNCEMENT ON THE DETENTION OF NIKOS PILOS https://t.co/H065jo8hAN

Meanwhile, the president of workers at Agios Savvas cancer hospital, located next to Prosfygika buildings, complained in a statement that police created panic to patients and personnel, forced patients to walk long distances to reach the hospital for their treatment and that police fired also sound flares close to the facility.

The 78 arrestees are charged with a number of charges including the offenses of violence against officials and judicial persons, disturbing the public peace, causing bodily harm jointly, causing grievous bodily harm by complicity and in an attempt, damage to foreign property , as well as violation of laws on weapons, flares and sparklers, reports daily efimerida ton syntakton.

According to Skai TV, police investigates whether the 27-year-old man – “an anarchist” so the police – is also responsible for an attack at the offices of ruling New Democracy.