Breaking News
Home / News / Economy / Olli Rehn: Greek haircut did not happen in 2010 in order to save European banks and EU member states

Olli Rehn: Greek haircut did not happen in 2010 in order to save European banks and EU member states

January 14, 2014 Economy Comments Off on Olli Rehn: Greek haircut did not happen in 2010 in order to save European banks and EU member states 108 Views

It’s official! What we thought and reported about back in 2010 and 2011 about why there was no haircut of Greek debt, it’s been now officially confirmed by EU commissioner Olli Rehn. “Greek debt did not undergo restructuring ( haircut ) in 2010,  in order to avoid contagion of the crisis in other  member states and European Banks,” Economic and Monetary Affairs EU commissioner Olli Rehn replied to a question posed by SYRIZA MEP Nikos Hountis, during an session between Rehn and Members of European Parliament on the work of the troika of international lenders.

As expected left-wing SYRIZA commented on Rehn’s reply stressing in a statement “Greece had to sign loan agreements so that European economies and banks be saved.” 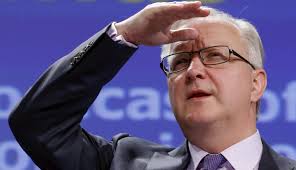 Olli Rehn watches out for the Troika

But Greece and the Troika was not the only topic during the Rehn-MEPs session. Read below the report of Euobserver:

In a two-hour long grilling by MEPs on Monday (13 January) in Strasbourg, EU economic affairs commissioner Olli Rehn defended the work of the troika of international lenders: the European Commission, the European Central Bank and the International Monetary Fund.

He said troika officials had to make decisions in “dramatic circumstances” and under “terrible time pressure” back in 2010, when Greece was about to default on its debt and Ireland and Portugal were on their way to asking for a bailout.

Several MEPs asked Rehn why there is so little transparency on the troika’s work.

Their questions come after euro-deputies who visited Cyprus and Portugal last week reported that the lenders bullied national governments into making cutbacks.

But Rehn said that “[bailout] conditionalities are not dictated by anyone, but agreed with the beneficiary country, which is accountable to its national parliament.”

He indirectly acknowledged that some eurozone countries – notably Germany – dictated the way the eurozone rescue was designed, however.

He said the European Commission from the beginning favoured an EU “solidarity mechanism” for troubled euro-countries, but EU member states rejected it and opted for bilateral loans to Greece instead.

Rehn recalled he had been barely sworn in to his post, in February 2010, when the first eurogroup conference call was held to deal with the ever-growing budget deficit in Greece.

The deficit was initially projected to reach three percent of GDP in 2009, but climbed to 16 percent.

Rehn also blamed EU member states for rejecting a proposal by the EU commission in 2005 to give the EU statistics office, Eurostat, real auditing powers.

He indicated that the move would have helped to prevent Greece from giving false figures on its deficit – a major factor behind its near-collapse.

He said the troika repeatedly got its Greece economic forecasts wrong because of “political instability” and lack of reliable data.

Rehn also revealed that he spoke to the Portuguese finance minister about the necessity for reforms already in 2010 because it was clear Portugal was going to be left out of markets and need a bailout – “which then happened in April 2011.” (full story euobserver.com)

Greece underwent a debt restructuring in March 2012, after all banks and member states had secured themselves….