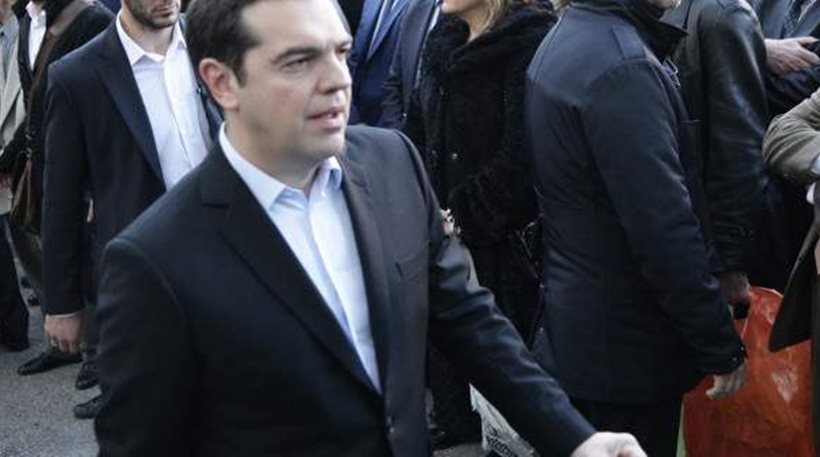 Just hours before the EU Summit to celebrate 60 years from the Treaty of Rome and the Rome Declaration, Greek Prime Minister Alexis Tsipras sent a letter to European commission president Jean-Claude Juncker and European Council president Donald Tusk. As the country is in the middle of negotiations difficulties with regards to the conclusion of the second review, Tsipras asks if the European law (acquis) is valid for all EU member states except Greece.

The Greek Prime Minister calls on the presidents of the highest EU institutions to take clear position on Greece and the European “acquis” regarding labor and social rights. The EU acquis are the accumulated legislation, legal acts, and court decisions which constitute the body of European Union law.

Alexis Tsipras question is connected to the collective bargaining for workers, rightst that are protected under the EU. However, the European lenders and primarily the International Monetary Fund seek to abolish in order to “make Greece more competitive” as they claim.

The letter was sent on Thursday night, as the EU officials prepare the joint Declaration to celebrate 60 years of the institution.

Expressing Greece’s intention to support the Rome Declaration “which moves in a positive direction,” Alexis Tsipras asks whether the European “acquis” are valid for all EU member states or for “all except for Greece.”

In his letter, the Greek prime minister writes that in these 60 years, the EU consolidated the achievements of its peoples whose goal is to “ensure progress, prosperity, and peace”. And he notes:

“Nevertheless, in order to be able to celebrate these achievements, it has to be made clear, on an official level, whether they apply also to Greece. Whether, in other words, the European acquis is valid for all member states without exception, or for all except Greece.”

Tsipras explains that Greece has been in programs of economic adjustment for the last seven years, in the name of which “a situation of exception from our common European acquis has been implicitly imposed”.

“It is not understood why there should be a prolongation of the exception of Greece from the European social acquis,” Tsipras stressed. 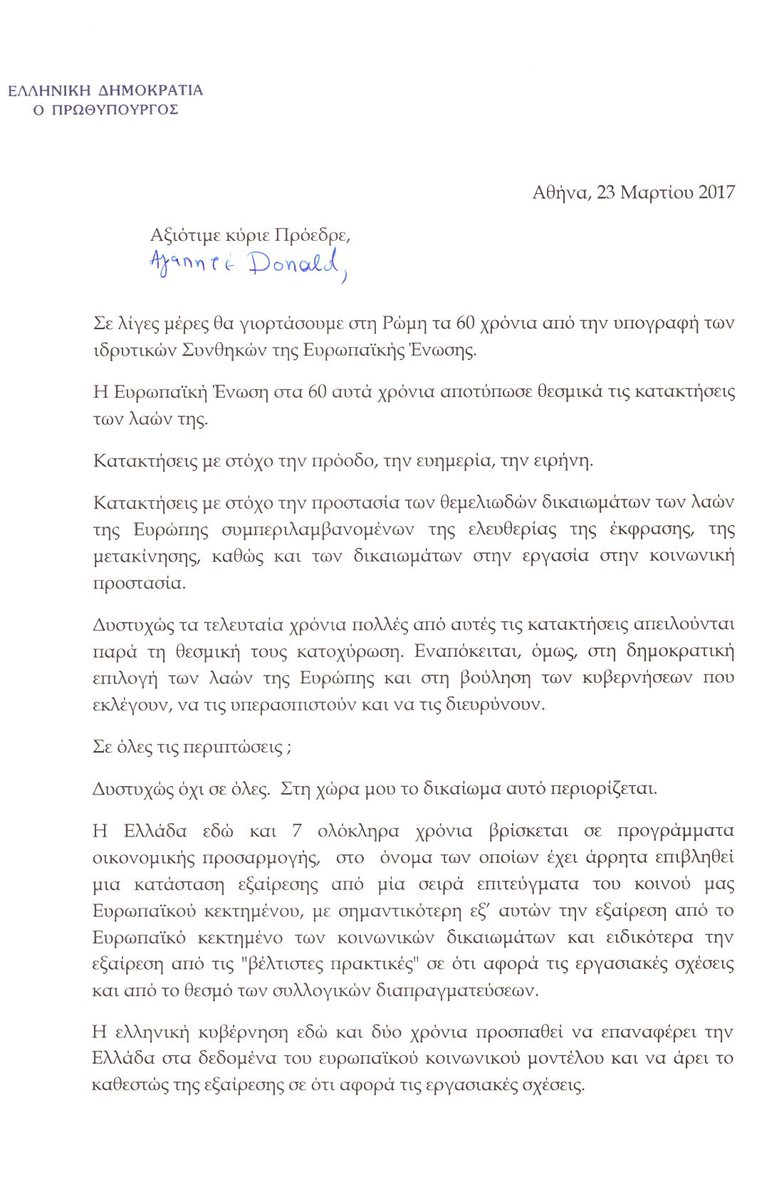 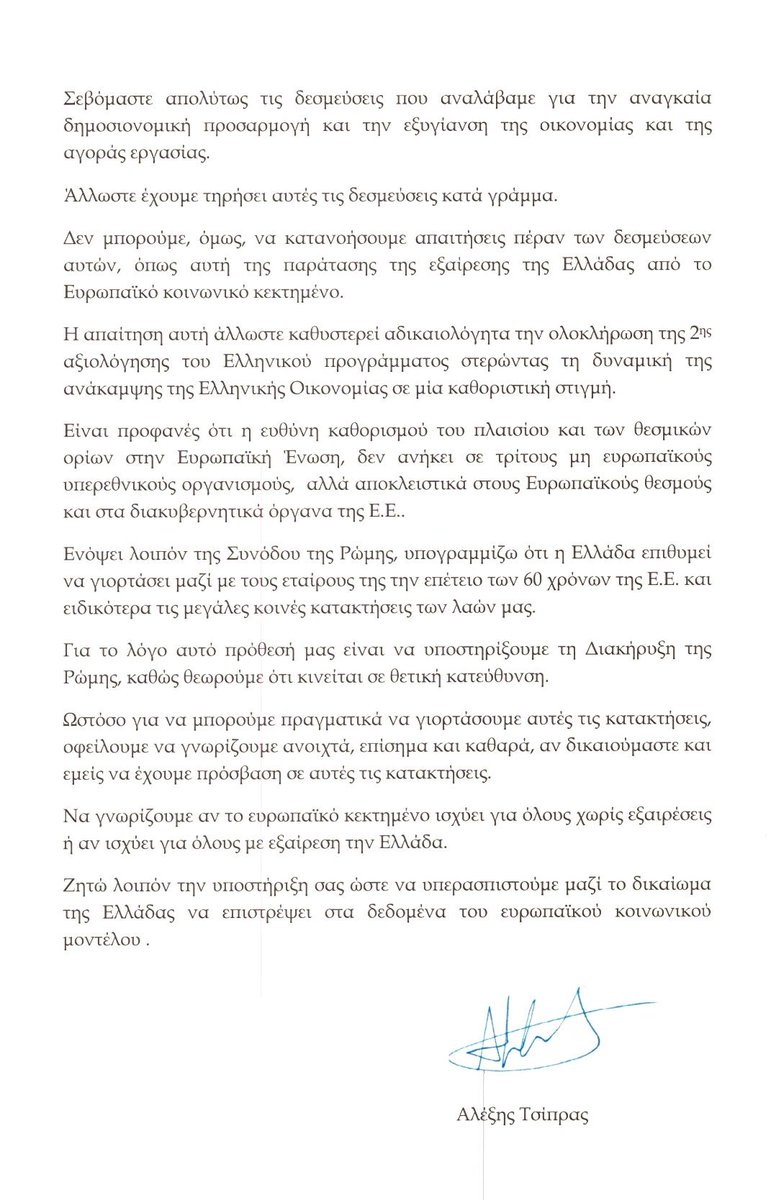 The letter was also sent to Prime Minister of Malta Joseph Muscat who holds the rotating EU presidency and his Italian counterpart Paolo Gentiloni, who hosts the EU Summit in Rome.

Good question from @tsipras_eu. Collective agreements are an essential element in the European social model. https://t.co/KdWAN3KmvW

@tsipras_eu asks a good question! Eurogroup’s austerity imposed on Greece : is this a temporary exception to the EU acquis, or the new norm? https://t.co/c27jFG3uXo

But German conservatives got furious and wrote long articles with titles like “Tripras threatens the EU”. In the sense: How dares he!?

EU: We won’t be blackmailed by Greece

Greece’s objections were clear even before the official letter. EU officials said on Thursday, they were hopeful Greece would drop its eleventh-hour objections to a declaration marking the bloc’s 60th birthday, sparing it a major embarrassment as it struggles for unity despite the looming departure of Britain.

The negotiations on the draft Rome Declaration have ended as the text was finalised by the EU27,” an EU source said. “Only Greece has a general reservation on the text.”

The source added the chairman of EU summits, Donald Tusk, had spoken to Greek Prime Minister Alexis Tsipras on the matter. “This leaves us relatively confident that it will be possible for Tsipras to sign the Rome Declaration on Saturday.”

An EU diplomat said any attempt by Athens to win leverage on the international debt talks by holding off in Rome should not succeed: “We won’t be blackmailed by one member state which is linking one EU issue with a totally different one.”

However, it is not only Greece creating problems to the EU that won’t allow to be blackmailed.

Poland indicated on Thursday it might also refuse to endorse the declaration, though diplomats played down the threat.

Warsaw is particularly opposed to a ‘multi-speed Europe’, an idea promoted by Germany, France and Brussels, among others, to help improve decision-making in the post-Brexit EU.

This would allow countries keen to deepen cooperation in specific areas to press ahead without waiting for the whole bloc. Poland and some other eastern EU countries fear they could end up as second-class members, increasingly left behind by wealthier west European nations.

“If the declaration does not include the issues which are priorities for Poland, we will not accept the declaration,” Polish Prime Minister Beata Szydlo said.