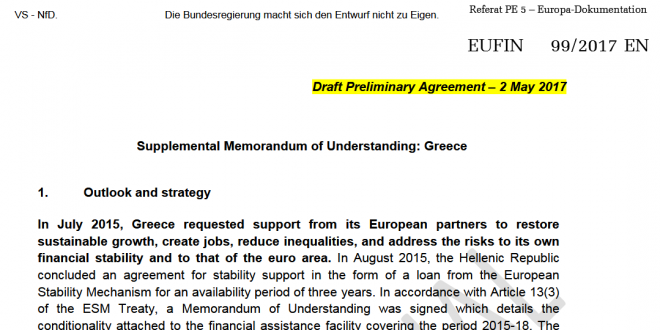 Mission impossible for Greece: Creditors’ 100 Prior Actions in MoU May 2017 – Full Text

The full text of the Supplemental Memorandum of Understanding, the Draft Preliminary Agreement between Greece and creditors from May 2 2017 has been obtained by German finance newspaper Handelsblatt. A total of 53 pages describing in full detail the prior actions Greece will need to take not only for 2019 and 2020 but start already in 2017.

The Supplemental MoU is a recapitulation of the outstanding prior actions included in the 3. bailout of August 2015 and in addition more prior actions, because… By best will, I honestly cannot understand why the need for additional measures after the Greek Program ends in August 2018.

If we were to believe Greece’s European Creditors, it is the International Monetary Fund that put pressure for a package of additional measures, because the IMF that does not participate in the program but has an advisory role does not believe Greece can reach the Primary Surplus of 3.5% and that debt is not sustainable. But in fact, the IMF is just a pretext for creditors to finish Greece’s economy and population once for all.

Reading all these “Must Do’s”, all these paragraphs, ‘reforms’ and ‘structural reforms’ in the May 2 MoU, I can hardly believe there will be any Greek alive by 2022 to enjoy the debt …sustainability, the sustainable recovery and the ‘growth’ the lenders claim to have in mind. 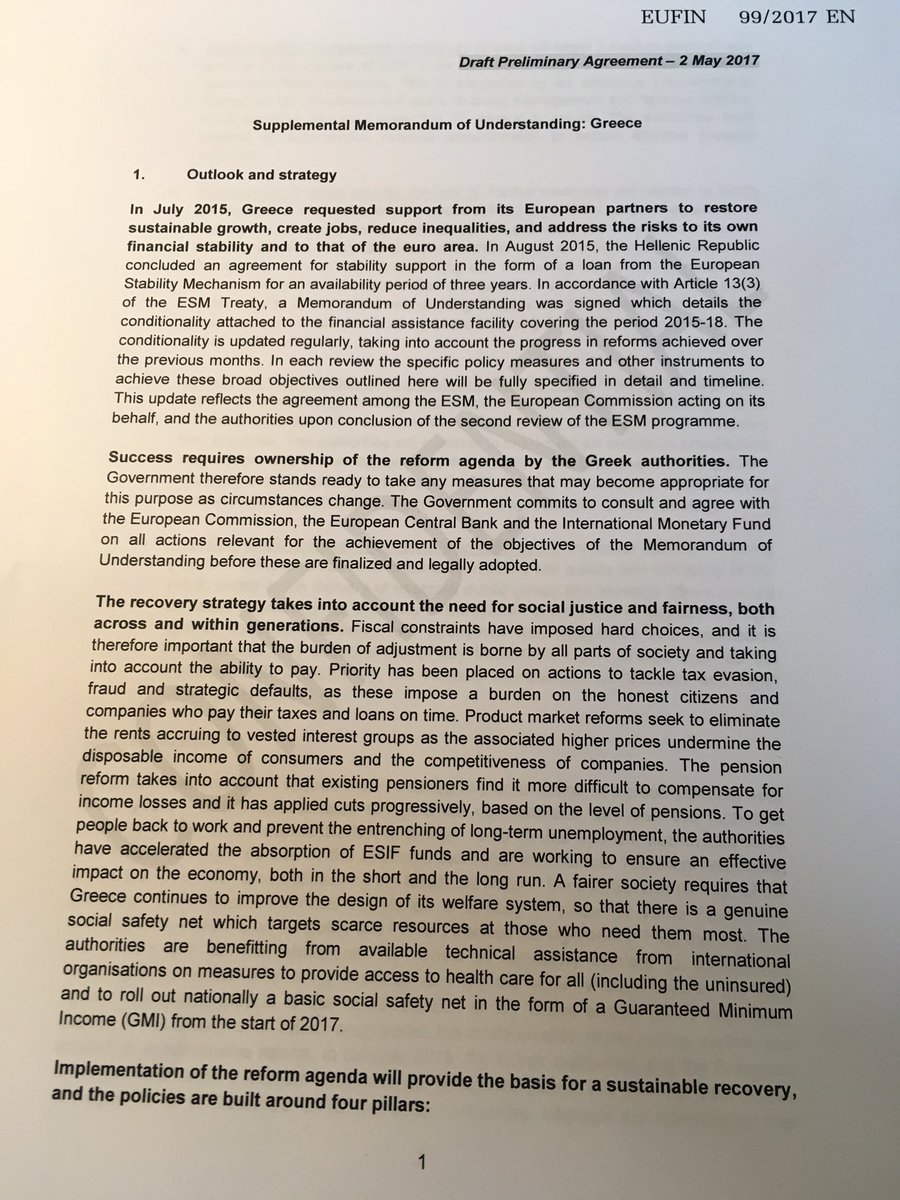 Starting with the further extermination of the poor,  the elimination of low-pensioners poverty allowance (EKAS) will go forward with cuts worth €570 million in 2017, €808 million in 2018 and €853 million in 2019. Total benefit for Greece 2.2 billion euros. The allowance will be erased as of 2020. 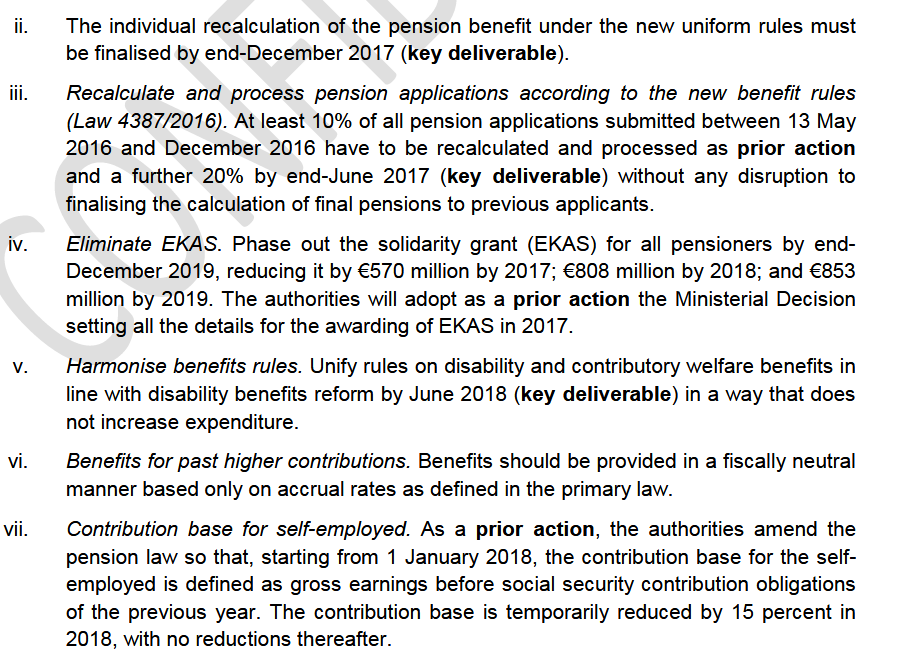 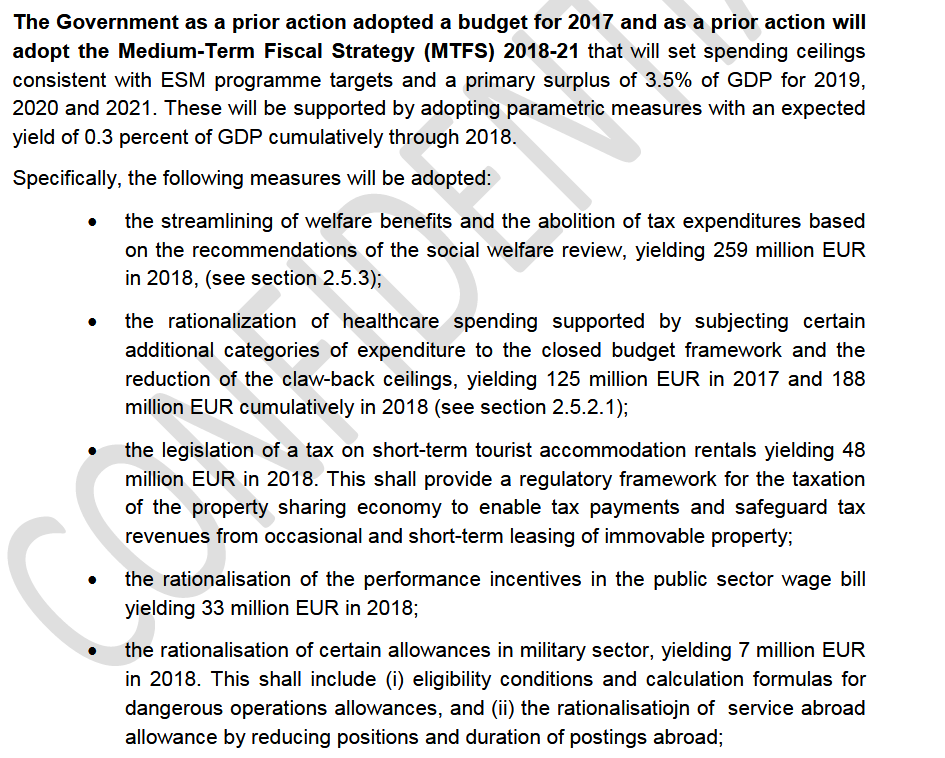 Other prior actions include the so-called reforms in personal income tax, increase in social security contributions for self-employed, further cuts in health care and social welfare, re-calibration of pensions, taxing the poor, more expenditure cuts in the public sector, mass lay-offs, privatizations, provisions for water and electricity,… 53 pages long. The primary surplus is set at 3.5% for 2019-2022.

EU Commissioner Pierre Moscovici has recently said that from 140 prior actions [since 2015] Greece has implemented 40 and that 100 were still due.

The Supplemental MoU – Draft Agreement was obtained by @JanDHildebrand, deputy editor in chief of Handelsblatt and uploaded on internet. 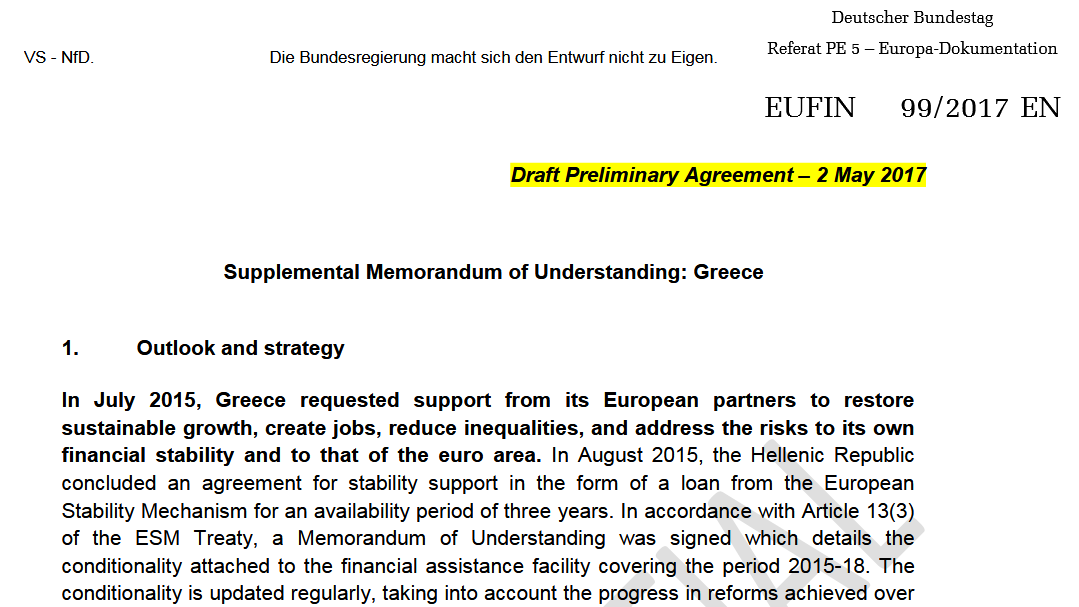 What I find interesting is that the Text contains also a mark of the German Parliament (Deutscher Bundestag) – Apparently the moment Greece and creditors agreed on May 2, the text was delivered to the German Parliament. Or it came from there via the European Commission and the International Monetary Fund.

The Greek government will bring the package of measures to the Parliament for legislation on May 15 for debate. The voting will take place on May 18. The 153 lawmakers of SYRIZA-Independent Greeks coalition are expected to approve the Agreement as it is precondition for the conclusion of the second review of the Program.

Government Ministers and MPs tell media and the people that the government had to accept the new measures for the sake of the review. The government considers as negotiations success that the rate for mass dismissals was not increased and that a package of  so-called counter social measures has been accepted by the creditors. Its implementation is questionable though.

The third review of the Greek program will start in autumn. By then, creditors may come out with a new package of prior actions and methods to drain further the Greeks, a revised MoU could be possible at the end of the negotiations. Because the MoU of May 2017 has no provisions for until 2022.

Do not get me wrong. I do support real structural reforms in the public administration to have this state of Greece finally operate for the benefit of Greek citizens or cut the high and undeserved pensions of civil servants. But to deprive the poor of essentials and crack all very small, small and medium enterprises, the backbone of the Greek economy, is cruel – so say it polite. It smells like a well workout-out plan.

PS Creditors’ main problem is that Greeks refuse to die…