Breaking News
Home / Travel / Tourism / Summer Sailing in the Aegean: A challenge against the waves and nausea (video) 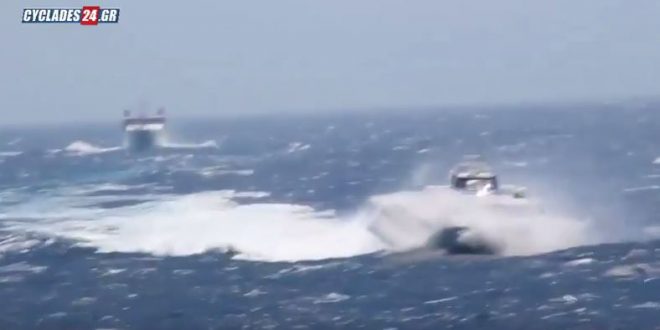 Summer Sailing in the Aegean: A challenge against the waves and nausea (video)

July 26, 2017 Tourism Comments Off on Summer Sailing in the Aegean: A challenge against the waves and nausea (video) 1,163 Views

Sailing in the Aegean Sea can be an adventurous trip not only in winter but also in summer time. The known north-wind “meltemi” can bring the waves up and your stomach down.

I recently sailed on a small commercial boat from Antiparos to the port of Paros. When the wind is blowing with intensity of more than 4 Beaufort, the sea area between the two islands is filled with white horses – we call them “little sheep” (προβατάκια) in Greek. the trip lasts just 20 to 30 minutes.

I didn’t think of anything bad as I love to sail on rough sea and consider myself immune to sea-sickness since I was a child.

But this trip was kind of different, nevertheless the currents in the area, I suppose.

Long time ago, a sailor had told me that the seventh wave is always the biggest. Ever since, my inner clock adjusts …waiting for the horrible seventh wave, until the boat returned to its normal rhythm.

But on this trip from Antiparos to Paros… Oh My! I thought, there were three consecutive “seventh waves” coming from the north, which was on the left side of the boat. Aaaahhh! I cannot describe it with words. the left side of the boat was lifted, the waves were beating the wooden hull, and white foam was wildly splashing on the windows. BRRRAAFFF! BRRRAAAFFF! BRRRAAFFF! Wild White Horses! Then the boat would return to the normal up-and-down rhythm and then again… the three consecutive ‘seventh waves’.

The two young seamen would run around bringing paper-bags to the few passengers who were pale or yellow and were trying to keep their breakfast inside.

Was I afraid? I wasn’t. Not really. Because I thought, the captain sails through this passage 365 days per year or … ok… maybe just 300 when the wind intensity is over what? Six? Seven Beaufort?

“When was the last time I read a boat sank in the Aegean because of the rough sea?” I though. It was …never?

When we entered the gulf of Paros port, the sea calmed down and we docked in safety. Some passenger got off board still looking pale or yellow, though. They had left the paper-bags in the ship.

Greek sailors are very skilled and can deal with the moods of the sea, whether rough or calm.

And here is a video, of two boats trying to reach the island of Folegandros at 7 Beaufort, locally 8 B, on July 19.2017.

Cyclades24.gr noted that when the ships docked, passengers stayed inside for 15-20 minutes until they had overcome nausea.

There are these little beige pills against sea-sickness….

PS I regretted to not have shot some pictures of the Seventh waves beating our boat, but my friend looked at me with a mysteriously dark and sidelong glance when I talked of a another ride on the white horses.