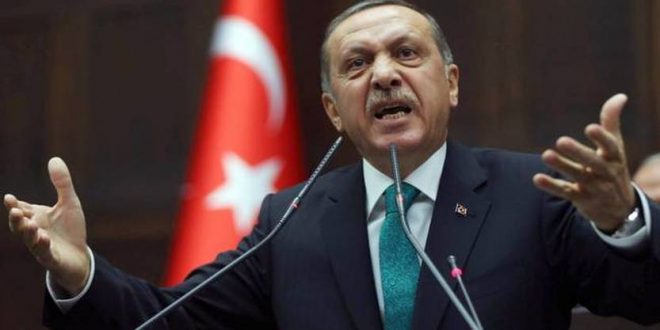 Erdogan: Stability in Cyprus and East Med only if Turkey’s interests protected

May 11, 2019 Turkey-GR Comments Off on Erdogan: Stability in Cyprus and East Med only if Turkey’s interests protected 255 Views

Turkish President Recep Tayyip Erdogan said that stability in Cyprus and the Eastern Mediterranean Sea can be possible only if the interests of Turkey and Turkish Cypriots are protected.

“Stability in Cyprus and the Eastern Mediterranean is only possible by looking after the rights and interests of Turkey and the Turkish Republic of Northern Cyprus,” Erdogan told ambassadors during the fast-breaking (iftar) meal organized at the ruling AKP headquarters.

He reiterated that Ankara would not tolerate a fait accompli in the region, and all related parties are aware of the fact. “Like all problems, we want to solve this issue with reciprocal talks, dialogue and cooperation,” he added.

Turkey has consistently contested the Greek Cypriot administration’s drilling in the Eastern Mediterranean, saying Turkish Cypriots also have rights to the resources in the area.

Last week, Turkey dispatched its drilling vessel Fatih toward  the Exclusive Economic Zone of Cyprus to launch drilling second well in the Eastern Mediterranean. The move was met with criticism by the U.S. and the EU, despite Turkey’s claims that its drilling and seismic survey operations fully abide by international law, having registered its own EEZ with the United Nations. This registration has been challenged by Greece.

Referring to EU sanctions for which Greece and Cyprus are pushing for, Erdogan said “We are a NATO member. So it is not possible for us to accept the wrongdoings of other NATO members toward us.”

Cyprus is not a member of NATO, but Greece is.

“You will be a NATO member; a strategic partner in NATO, then they will talk about sanctions against you. This is not something understandable,” the Turkish president said.

Noting that the situation does not suit a partnership, he stressed that Turkey has been significantly contributing to the NATO alliance for over 60 years.

He also said that membership in the EU has always been Turkey’s strategic foreign policy target, but the bloc is trying to fool Ankara.