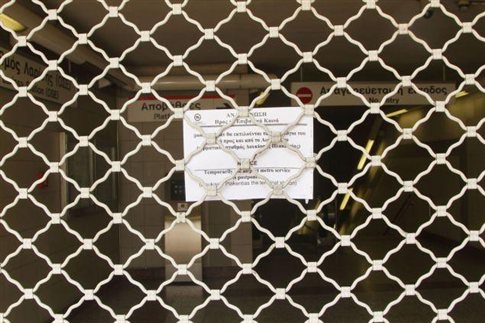 May 9, 2022 Society, Strikes Comments Off on Metro, Tram, ISAP trains on 3h work stoppage, rallies in downtown Athens, May 10 539 Views

Athens metro, urban train ISAP and the tram will not run for three hours on Tuesday morning, May 10, due to a work stoppage launched by the STASY workers’ unions.

Unions said the work stoppage would last from 9 a.m. to 12 noon.

Metro, tram and ISAP trains are expected to withdraw from traffic earlier than 9  a.m. and will resume normal operation later than 12 noon.

STASY unionists have called on all employees of the transport companies to participate in a protest against the government’s planned labor law.

According to an announcement by workers’ unions at STASY, the workers will participate in the work stoppage launched by the Athens Labor Center and the public sector union ADEDY as their appeal against the so-called Hatzidakis Law” for the trade unions will be examined by the Council of State.

“Hatzidakis Law” passed in June 2021 and curtails unions independence and their right to strike.

However, the remaining public transport means are reportedly expected to operate as usual.

ADEDY will hold a rally at 9:30 am. outside the CoS on Panepistimiou Avenue in downtown Athens.

Two hours later, at 11:30 a.m., the Panhellenic Federation of Public Hospital Employees (POEDIN) is scheduled to hold a protest march from the Health Ministry near Omonia Square to Syntagma Square to protest a bill seeking to privatize a part of Greece’s primary healthcare system and introduce private surgeries, the so-called “afternoon surgeries” at public hospitals.