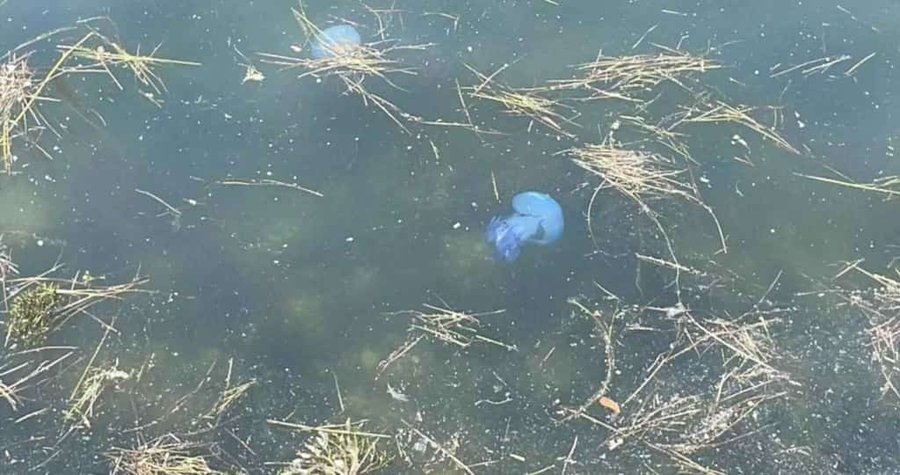 After the purple jellyfish, it is now the turn of their blue cousins to enjoy the Greek waters. Swarms of Blue jellyfish or Rhizostoma pulmo, commonly known as the barrel jellyfish  have arrived in Thessaloniki and swim in the shallows the waters of Thermaikos Gulf in the last couple of days.

It looks as if they have arrived earlier this year, in the last days of June and not end of July, as they usually do, according to Greek scientists.

Video: blue jellyfish spotted at a beach of Thessaloniki on June 22, 2022

Professor of the Department of Biology of the Aristotle University of Thessaloniki, Hariton-Charles Hintiroglou, explained news website GRTimes.gr, “the blue jellyfish are swept to the beaches by the sea currents and the winds and are carried by the movement of water. Although every year we have jellyfish, now their density is higher.”

According to Hintiroglou, “these jellyfish usually come in the shallows and are found on the water surface because they need light.”

The blue jellyfish uses its tentacles to catch, sting, and kill its prey. The venom it uses is a mix of phenols and proteins that are deadly to their prey, but not to humans. Immediately after you get stung by a bluebottle, you will feel an intense jolt of pain

According to the Hellenic Biodiversity Observatory, “if a blue jellyfish touch us we feel a burning and itching, but due to the mucus with the toxins they release into the water we can feel the burning and itching even if we do not touch them and just swim next to them.”

Although one can easily push them off from their bell and due to their size it is difficult for someone to not avoid them, it needs great\t care if someone touches them: Do not touch your face because it will swell immediately (it is like touching a chili pepper inside and then touch your face!).

Rhizostoma pulmo or blue jellyfish are big in size, up 90 cm diameter of the bell. They are often blue or even white in color and have always a purple stripe perimetrically at the edge of their bell.

According to state broadcaster ERT, their outbreak is not so big as in the Adriatic Sea.

JellyReport will be published every Sunday with useful information on jellyfish appearances for the running month, on  weather conditions such as wind forecast for the upcoming week and other information regarding jellyfish in general.

For proper information, citizens are invited to upload their registrations to iNaturalist through the website: https://www.inaturalist.org/observations/upload or the corresponding application “iNaturalist”  for android and ios mobiles.

As the Hellenic Biodiversity Observatory points out, the systematic refusal of some citizens to take personal care only of their own swimming and not to spend 1-2 minutes to add/register jellyfish recordings in iNaturalist creates a small problem of lack of proper information about which beaches tare affected by jellyfish appear, what species of jellyfish and their population outbreaks if they exist in the respective area.

Recording of the purple jellyfish in the month of June 2022. 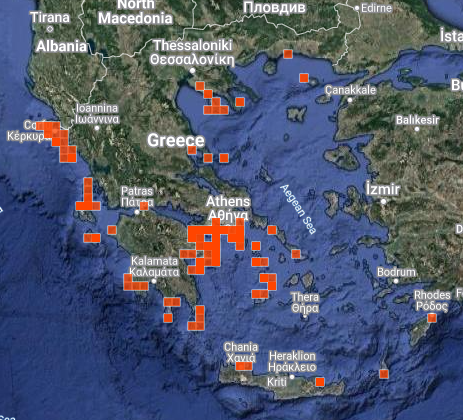 Citing the Purple Jellyfish recordings on inaturalist, biodiversity.gr notes that based on the records of the last ten days (June 16-26, 2022) on the iNaturalist platform, we see most of the population increase in the Saronic Gulf, extending to the Argolic Gulf and the Cyclades, the Ionian, the Southern Peloponnese, the North-West of Crete and the 1st leg of Halkidiki.

With smaller appearances in other parts of Greece, with the islands clearly visible – although nothing has been heard of the North Aegean (Lemnos, Lesvos, Chios, Ikaria and Samos), as well as in the Gulf of Corinth (although citizens say they have seen jellyfish – not confirmed).

Purple Jellyfish in Greek and Mediterranean seas in summer 2022 here

What to do if you get stung & how to avoid affected beaches here.

PS I hope nobody swims in this filthy waters of Thermaikos with the blue jellyfish and whatever else seems possible to swim around.

Tags blue jellyfish Greece JellyReport Thessaloniki what to do if stung