Loukanikos: Athens Riot Dog made it to BBC! (video)

Loukanikos, legendary riot dog and front-man at every protest rally is Athens has made it up to BBC! The UK broadcaster uploaded a footage of the blond four-legged protester in action. What else should the dog do except running, jumping and barking?

BBC wrote on its page:

﻿One committed protester was at the front line when Greek police fired teargas at protesters outside parliament on Wednesday.

The dog, thought to be a stray called Loukanikos, or Sausage, has been in the centre of the action for years.

Here are some of his most memorable moments, gathered by Newsnight.

And here is the footage!

Loukanikos came to fame after being pictured at every rally in Athens the last two years. It is a challenge for every protester or reporter  – incl KTG – to capture a snapshot of the occasionally tired but mostly very vivid dog who even manages to regulate the traffic! Loukanikos has a very clear stance on the Austerity and only recently he  made a comment on the issue. Last December, we even tried to ‘read’ what’s on the mind of a riot dog through a collection of pictures and videos!

… and before I forget it! There is a Greek website dedicated thoroughly on Loukanikos, the Rebel Dog  , with many pictures and videos.

Thanks to all those for sending us the links and his latest picture! 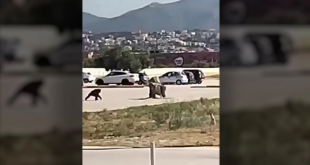 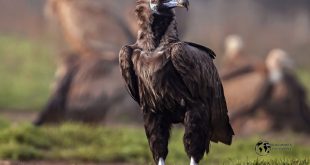 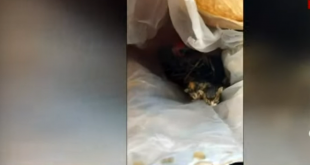 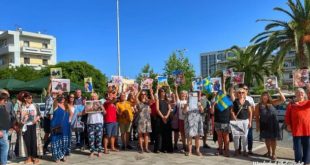