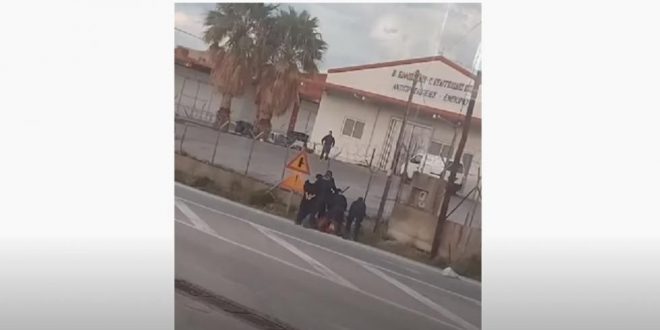 Three border guards and one policeman have been suspended from service after a video showed them beating two refugees outside a supermarket of the island of Lesvos, the Chief of the Greek Police announced on Saturday morning. An internal investigation has been launched against the four, the statement added. Police speaks of “use of violence against people during control check.”

The video was published on Friday afternoon by newspaper Efimerida ton Syntakton. The four policemen stopped them for control as they were returning from supermarket, threw them on the ground  and started beating them for no apparent reason.

One policeman is holding one of the refugees who is handcuffed and kicks him as well as the other who is on the ground and surrounded by his colleagues. The three keep beating and kicking him while he remains down in the ditch on the side of the road.

In a comment the President of the Panhellenic Association of Border Guards claimed that the victims were “not refugees but migrants seeking asylum” and that “they were drunk.”

He said further that the police was called following complaints that the victims were stopping drivers on the road.

“The migrants resisted during their arrest, swore and spat” the border guards and the policeman, he added.

Local newspaper lesvosnews described the comment as “unbelievable” and said that “even if the two had  behavior, you handcuff them and bring them to justice. the beating cannot be justified.”

According to local news website stonisi, the two arrested asylum seekers were released and returned to the tent camp of Kara Tepe.

A team from the Internal Affairs Department of the Greek Police is expected on Lesvos to investigate the case.

PS The incidents of police violence have dramatically increased recently. As we’ve said before, it looks as if they have adopted the wrong role model, that of police in the USA.